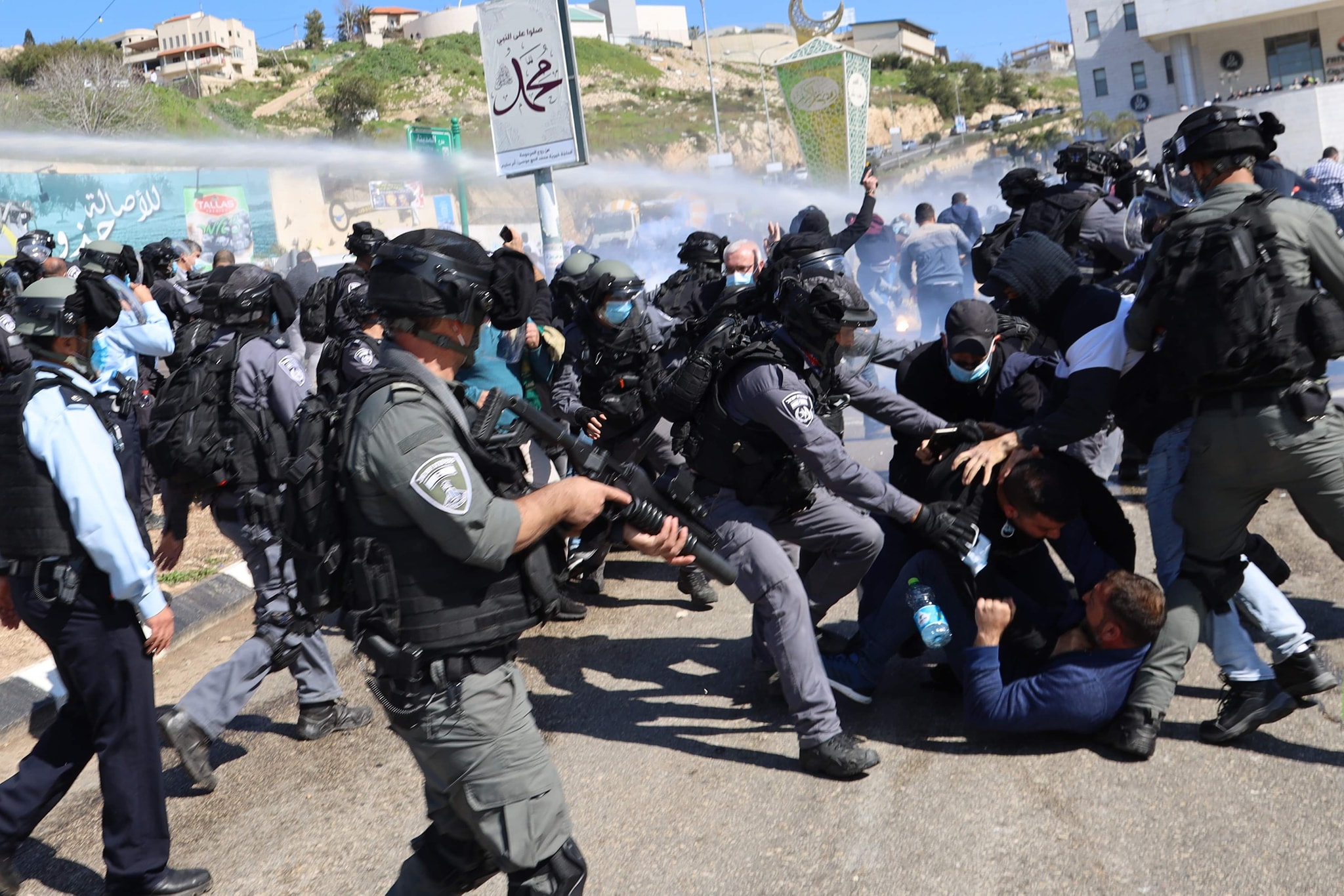 What happened over the past few weeks?

The vicious and calculated attacks on worshippers in the Al-Aqsa Mosque and during the Greek Orthodox Easter celebrations, as well as the forceful evictions of Sheikh Jarrah residents in occupied East Jerusalem sparked a wave of peaceful demonstrations across Israel by its Palestinian Arab citizens. Tens of thousands peacefully protested in various cities demanding the reversal of the Sheikh Jarrah evictions and the end of forcible land evictions, as well as a stop to the systematic racism and oppression that the Palestinian Arab minority of Israel faces on a daily basis.

These racist Jewish-Israeli groups are targeting the Palestinian Arab community in mixed cities in order to "Judaize" them. Much in the same way that settlers operate in the occupied West Bank, these groups (of whom many members are settlers themselves) want to settle Palestinian Arab neighborhoods within the mixed cities. Moreover, these groups are supported by the Israeli government, as government funds flow into these groups and local municipalities give them priority in access to public buildings and new construction.

The Mossawa Center is documenting all the racist incidents that occurred over the past month. This includes obtaining and storing footage of attacks by Jewish extremists against Palestinian Arab citizens, evidence of police brutality, as well as the correspondence on group chats obtained by journalists between the organizers of the racist Jewish mobs that took over the streets of Israeli cities.

Becoming a Resource Center for Palestinian Arab Citizens of Israel

We created a page on our website for Palestinian Arab citizens of Israel that provides information and guidance on several issues, including the contact information of various lawyers, medical teams, media and community support, institutions, and individuals, should their civil and human rights be violated.

The Mossawa Center also took an active part in the Arab Emergency Center and worked closely with the High Follow-up Committee, the Committee of Heads of Local Authorities, and other NGOs to advocate and protect Palestinian Arab citizens that were being violently arrested by the police or attacked by racist Jewish mobs.

One of the major issues we have been tackling over the past month has been the police's mass detention campaign aimed at suppressing and intimidating Palestinian Arab activists and advocates. Both the Acting State Attorney and the Attorney General in Israel are allowing the police to selectively enforce the law, with Palestinian Arab citizens of Israel being explicitly targeted and discriminated against.

We are following up on cases of unjust detentions, ensuring that detainees are not prevented from practicing their rights and have access to legal consultation. Moreover, the Mossawa Center, in cooperation with other organizations, has been providing detained Palestinian Arab citizens with support - legal, procedural, and otherwise - to ensure their rights to freedom of assembly and expression are not infringed upon nor suppressed.

Families and individuals that have been attacked received support and consultation and testimonies have been collected and sent to investigation authorities, including the Department of Police Investigations and Ministry of Justice.

Hundreds of Palestinian Arab workers turned to the Mossawa Center to seek help against Jewish-Israeli employers and managers in various businesses and workplaces who sought revenge against them after they went on strike in protest of the brutal attacked carried out against Palestinian citizens in Lydda, Ramla, Acre, Haifa, Binyamina and Jaffa. Workers from Lydda, who did not come to work after a closure was imposed on the city, were immediately terminated from their jobs.

The Tiberias branch manager of Victory - an Israeli supermarket chain - terminated 6 Palestinian Arab workers after hastily assigning hearings at inappropriate times and with baseless allegations, in violation of labor laws and the equality principles stipulated by law. This came as the chain of attacks on Palestinian Arabs, which included severe incitement against them, was not taken into account and the employees terminated entirely. "The decision was ready even before the hearing started. While at work during the ‘confrontational’ period, I felt uncomfortable with the racist and strange looks I would receive from Jewish customers," one terminated employee said.

The terminated workers, all of them university students, met with the director of the Mossawa Center, Jafar Farah, and attorney adv. Wissam Yassin, who specializes in labor laws, to discuss the justifications for their dismissal in order to initiate judicial proceedings against Victory. The Mossawa Center sent letter to Victory warning that it will take legal measures against it in the case of unreasonable and humiliating dismissal of several Palestinian Arab workers during the recent events in the country. Victory's lawyer, Yehuda Ever, responded to the Mossawa Center by refusing to allow the terminated workers to return to the store branch in Tiberias.

The Mossawa Center and a group of lawyers who specialize in labor laws are in contact with dozens of unjustly terminated Palestinian Arab workers in order to prevent their baseless dismissals, as well as protect them from harassment and harm in their workplace.

Palestinian Arab citizens in the city of Haifa are currently trying to receive compensation for the damages done to their property by the Jewish mobs that rioted in the streets. In addition to helping them receive compensation for the damages, we have contacted the Department of Police Investigations, demanding that the police officers that enabled the Jewish rioters to rampage through Palestinian Arab and mixed neighborhoods in Haifa be held accountable.

We are compiling and documenting all incidents of destruction of Palestinian-owned property such as cars, businesses, and houses in order to bring those who caused the destruction to justice, compensate the victims, and use the evidence to advocate and raise awareness about the urgency of protecting the Palestinian Arab community, especially now given that radical Jewish mobs that riot in Palestinian Arab and mixed neighborhoods are empowered by Israeli politicians and protected by the police.

The Mossawa Center sent countless letters to the Department of Police Investigations and has been persistently demanding the opening of an investigation into the case of 17-year-old Muhammad Mahamid Kiwan, a Palestinian Arab citizen who was shot and killed by police. Kiwan's case is another example of Israeli police showing complete lack of restraint and acting with impunity. Kiwan, a senior in high school about to finish his standardized tests and hoping to pursue higher education, was a youth leader among his classmates, the Student Council President, and a beloved member of his community.

Kiwan's family donated his organs, helping save the lives of 6 individuals, 5 of whom are Jewish patients, according to the Ministry of Health. The Mossawa Center intends to support the family throughout the legal process of prosecuting those who are accountable. Attorney Alber Nahas, a board member of the Mossawa Center, petitioned the Ministry of Justice and the Abu Kabir Forensic Institute, demanding that a family representative attend the autopsy process.

We are also following up on several other cases of police brutality. Israeli police violently dispersed the peaceful protests that occurred over the past few weeks and fired rubber bullets at demonstrators, leading to 8 Palestinian Arab citizens losing at least one of their eyes so far. We are following up on those cases with the Department of Police Investigations to hold the officers responsible for the injuries accountable and are preparing legal proceedings against the officers involved.

Our awareness raising work is more critical than ever given the events of the past few weeks. We will not only continue our workshops, lectures, and events in the coming weeks, but also expand them in both scope and scale.

The Mossawa Center was invited by the community center in the Palestinian Arab village of Kabul to a seminar entitled Identity and Rights where the components of national and civic identity were discussed. The Coordinator of Community Work at the Mossawa Center, Ali Ali-Saleh, gave a lecture aimed at introducing the concept of identity and emphasizing its role in promoting individual and collective awareness among Palestinian Arab youth in the country. The seminar also included discussions on the concept of identity crises and a presentation about the building of a national identity.

We also organized a Zoom seminar attended by over 300 people called Know Your Right with Dr. Loai Zreik who addressed participants' questions and concerns about racial harassment in workplaces and universities, and the legal dimensions of strikes by workers and students. The webinar, led by the Mossawa Center’s Advocacy Coordinator Alya Zoabi, placed particular focus on young Palestinian Arab citizens of Israel, who have virtually no resources to help them understand their civil and human rights, and adequately prepare, support, and protect them when their civil liberties are violated.

In another webinar called Illegal Dismissal From Work: How to Distinguish It and How to Deal With It, Dr. Zreik was joined by lawyer adv. Wissam Yassin to discuss the illegal terminations of employees who expressed support for the peaceful protests and strikes by Palestinian Arab citizens of Israel. The speakers addressed why such dismissals were illegal and what to do if they happen.

Outreach to the Media

The Mossawa Center has engaged with countless media outlets, including the New York Times, to shed light on the events that took place over the past few weeks. The Mossawa Center provided news outlets with information and evidence it has documented over the past few weeks detailing countless incidents of racial discrimination and attacks against Palestinian Arab citizens. It also provided insight into the formation of the next Israeli government which includes parties from the far-right, left-wing, Islamic political spectrums.

Read more about it in the articles below!

A series of webinars and meetings were held with international actors in order to provide updates, insight, and analysis regarding the developing situation in Israel and the Occupied Palestinian Territories.

In a webinar titled Emergency Update: Sheikh Jarrah, Ethnic Cleansing & Apartheid, hosted by the American-Arab Anti-Discrimination Committee (ADC), Mossawa Center founder Jafar Farah and Executive Director Suha Salman Mousa discussed the situation on the ground in the region, the challenges and struggles that Palestinians in occupied East Jerusalem and the occupied West Bank face, and the reasons behind the flare up in violence.

Together with Adalah - The Legal Center for Arab Minority Rights in Israel, we conducted a joint briefing with more than 45 foreign diplomats and ambassadors to showcase evidence and provide information about the ongoing racism and incitement against the Palestinian Arab community inside Israel and the developments occurring on the ground.

Please visit our website and the Mossawa Center’s website for more information, materials, and analysis regarding the Palestinian Arab minority in Israel, Israeli politics, and other developments in the region.

For us to continue our vital work in the Palestinian Arab minority, please consider donating!