What really happened in Israel and Palestine over the past month 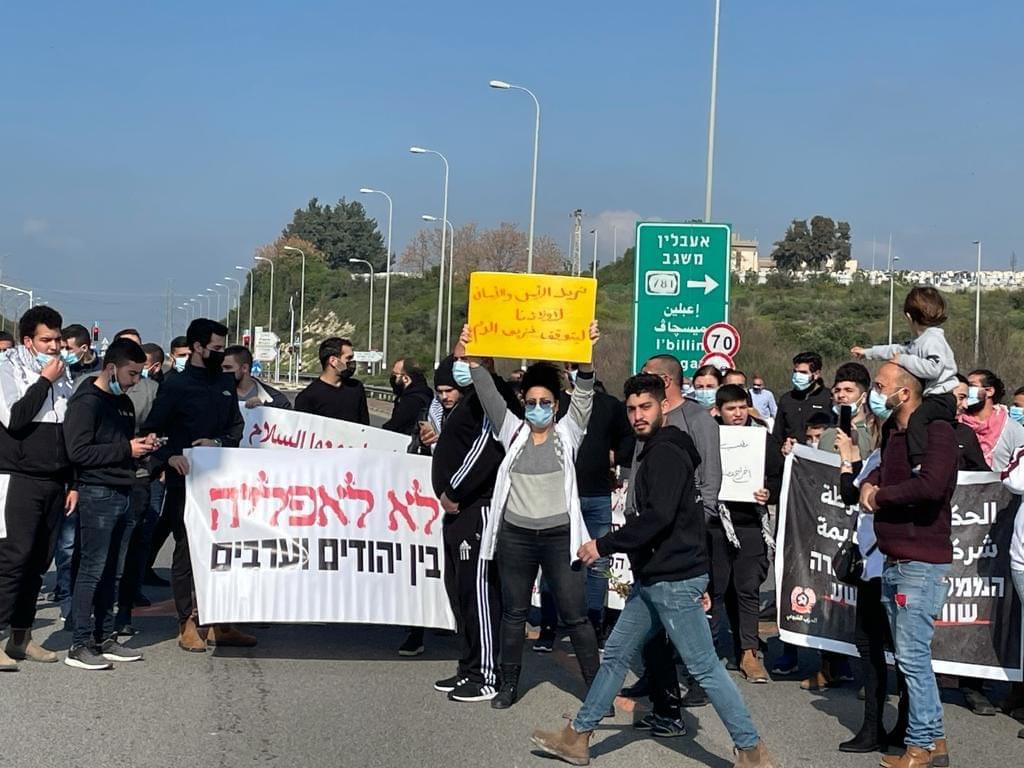 In this preliminary report we will try to describe the chain of events that occurred from the beginning of May 2021, as it has been documented by the Mossawa Center. Later on and after we have assisted in de-escalating the emergency situation that has arisen we will expand the report and add concrete data.

The current crisis was created by of Prime Minister Benjamin Netanyahu, who, over the past decade, has repeatedly incited against the country's Arab citizens. For the past five years he has worked to deepen the occupation, increase incitement and widen the rift in the public sphere. The crisis has led to four elections in less than two years.

During the March 2021 elections, Prime Minister Benjamin Netanyahu granted public and political legitimacy to Otzma Yehudit (Jewish Strength) the Kahanist Party led by Itamar Ben Gvir and Bezalel Smotrich. The Prime Minister signed a surplus vote agreement with them and promised them representation in his government. Otzma Yehudit continues the path of Meir Kahana’s Kach party, a racist party that incited against the Arabs and called for Jewish supremacy throughout Israel. The Kach party was banned and is on the list of terrorist organizations worldwide.

The party received six seats and is considered a key supporter of Netanyahu's continued rule. It deepened the incitement and during this time the phenomenon of attacking Palestinians throughout the occupied territories intensified, especially in Jerusalem.

Prime Minister Netanyahu, who lost the mandate to form a government on May 4, 2021, and is on trial on serious corruption charges, began looking for different ways to create a crisis. His government initiated the eviction of 28 families in Sheikh Jarrah, incited against the Bedouin Arabs in the Negev and severely violated religious freedom in Jerusalem in the past month.

Over the years, the Israeli government has violated the freedom of religious worship of Arabs of various religions. In the past month and at the request of the settlers, the government has stepped up its repression of freedom of religious worship for Muslims and Christians. The government sent the police and security services to disrupt political activity in East Jerusalem, and harmed religious events. Since the beginning of Ramadan, police forces have violated the right of worshipers to enter mosques.

On 5 May 2021, during the Easter procession of the Orthodox Christian community, police officers attacked the traditional procession, throwing stun grenades and tear gas, beating worshipers, and arresting many of them.

Police began placing roadblocks on the steps leading to the gates of the Old City leading to the Al-Aqsa Mosque and began restricting entry and harming passers-by who stood at the Nablus Gate.

On Friday and Saturday, May 7-8, 2021, the last ten days of Ramadan which are considered particularly important days and are dedicated to prayers, the police began to prevent the entry of Palestinian Arab worshipers, citizens of Israel, into Jerusalem. On Saturday, checkpoints were set up at all entrances to Jerusalem to prevent worshipers from Arab communities in Israel from reaching Jerusalem to pray at Al-Aqsa Mosque. The worshipers got off the buses and began praying on the main roads. Buses and vehicles from Jerusalem and Abu Ghosh began to pick up and drive the worshipers many of whom had begun marching towards the mosques.

The Response of Hamas and the Palestinian Authority

Hamas' warnings were received with contempt. The parties of the opposition did not warn Netanyahu of the potential reaction either. Once Netanyahu failed to create a mandate to form the government, he acted to ignite a regional war. Hamas fired rockets at Israel on May 9, 2021 and the government shelled Gaza on May 10, 2021.

Netanyahu ordered the police to suppress the protest demonstrations of Palestinian Arabs inside Israel while violating the basic right of freedom of expression. Protests held in Haifa on May 9, 2021 were met with unprecedented police violence. Suppression of freedom of expression included the use of stun grenades, rubber bullets and tear gas. The political arrests were made in Haifa and most of the detainees were transferred to extensions of detention in the courts in Haifa. The detainees reported violence against them after their arrest and on their way to the police station. Haifa Police Chief Amir Goldstein appears to be ordering violence against protesters. Goldstein has worked for the past five years to infringe on the freedom of expression of Haifa Arabs and has a history of defending racist groups that harmed Arabs in 2018.

Damage to Arabs in Mixed Cities

Although Haifa Arab leaders turned to Mayor Einat Kalisch Rotem, on May 12, 2021 she again placed municipal policing at the disposal of the Haifa police who once again harmed Arab residents and was complicit in crimes committed by racist gangs when attacking Arab citizens' homes in mixed neighborhoods and the Technion on May 11, 2021.

In the city of Lydda, the mayor set up the municipality and a school to serve groups of settlers who came from outside the city to provoke the Arab residents. An Arab citizen was murdered by a racist criminal on May 11, 2021, and four were injured. The killer was released to his home by police. Arab residents went out to protest the murder and the police brutally attacked them. The Prime Minister imposed a curfew on the Arab neighborhoods in Lydda and on May 12, 2021 sent Border Police companies to assist the gangs.

In the city of Acre, the demonstrations were suppressed by the police. Young people who went out to defend their neighborhoods against racist gangs were beaten and harmed by police.

In the city of Nof Hagalil, elected officials worked to protect freedom of expression and the Arab residents, and no unusual events were recorded.

Over the past year, many incidents of harm to the Arabs of Jaffa have been recorded. There is constant tension in the city. Throughout the week, racist gangs attacked Arab citizens in the city of Bat Yam.

In Ramla and Haifa, the gangs arrived and marked Arab houses to harm them.

In Be'er Sheva, on May 11, 2021, racist right wing gangs attacked Arab students, and the university administration was forced to intervene and contact the police and activate the security to maintain the security of the Arab students.

Jewish rioters began to brutally beat Arab bystanders as well on the evening on May 11, 2021.

Injury to Media and Medical Personnel

Throughout the past week, Arab media people operating in the field have been attacked. Doctors and nurses reported assaults on their way to work. Many of them canceled shifts and sought protection from racial harassment.

Racist Mobilization of the Israeli Media

The Israeli-Hebrew media, for the most part, mobilized alongside Ben Gvir and his goons. They mobilized to support the war, interviewed Jewish experts on Arab affairs and treated Arab citizens as terror suspects, media commentators supported the war and incited racism.

On Thursday, May 13, 2021, the Prime Minister announced that he would use the Israeli Secret Agency (ISA Shabak) to suppress protestor practicing their freedom of expression. The arrests included the detetention of journalists, as well as the arrests of city council member Zohir Karkabi and youth leaders like Basel Farah.

On Friday May 14, 2021, hundreds of policemen and ISA personnel arrived to arrest the deputy head of the northern Islamic movement, Sheikh Kamal Khatib, from the mosque in the village of Kafr Kanna.

The government decided to impose a closure on Arab neighborhoods and localities using emergency laws. The city of Lydda and the town of Jadida Makr suffered from this declaration.

More than 2,150 Palestinian Arab citizens have been arrested over the past month. Most of them were brought before judges for requests of detainment extensions. Unfortunately, in a large part of the hearings the judges approved mass extensions of detention. The judges were overwhelmed with requests for detention extensions by the police prosecutors.

On the evening of Friday May 14, 2021, the stenographer left the detention judge on duty at the Magistrate's Court in Haifa and the judge began writing judgments in his own handwriting. He seemed exhausted and impatient with the lawyers who had spent the whole day waiting for their representatives. The prosecution presented the judges with false and falsified information. Videos that do not relate to the detainees were presented as evidence.

Over the past week, police have prevented service providers, including vital service providers such as emergency medical services, firefighters, and the Israeli Electric Company (IEC) from entering Arab neighborhoods in mixed cities, Arab cities and towns. Many of the wounded and sick were evacuated in private vehicles, electricity was cut off in the village of Nahef on Friday May 14, 2021 for its 15,000 residents for more than 48 hours.

Declaration of a General Strike

On Tuesday May 16, 2021, the High Follow up Committee for Arab Citizens of Israel declared a general strike for May 18, 2021. The strike had huge support from Arab citizens of Israel as well as Jerusalem, West Bank and Gaza. On the day of the strike, many citizens took to the streets spreading awareness of Palestinian Arab culture and history to children, youth, through connection with historians and senior citizens that have lived through years of war and unrest. The main purpose of the strike was to encourage the opening of a dialogue with Jewish colleagues about the current struggles of Palestinians in Jerusalem, Gaza, West Bank, and Israel.

Jewish business and citizens retaliated to the peaceful strike by firing employees who partook in the strike, attacking them on a personal level, or taking their patronage to Jewish owned businesses. Till today, May 26, 2021, Mossawa has documented more than 25 cases of mistreatment of Arab employees in the workplace.

Injuries and Death of Arab citizens of Israel

So far, close to 200 cases of injuries have been reported by Arab citizens of Israel. Many have not been reported as they were treated at private clinics due to fear of police arrests through hospital records.

Retaliation from the Israeli forces

On Sunday, May 23, the Minister of Public Security, Amir Ohana, announced “Operation Law and Order,” aimed at terrorizing Palestinians by arresting an additional 500 young Palestinian citizens of Israel. The police have thus far arrested well over 2,000 people, with over 70% of them being brought before judges to extend their detention. These arrests include activists, directors of civil society organizations, elected members of municipalities, youth leaders, and other youth arbitrarily.

On May 25, 2021 the High Follow up Committee for Arab Citizens of Israel held a press conference for Hebrew and Arabic media to respond to the unjustly declaration for arrests. During the conference, Mossawa Director's, Jafar Farah, house was visited by the police to arrest him for questioning. Municipal member, Raja Za'atri, was also arrested, at the same time. Mr. Za'atri was released midway to the police station when the police realized that proper procedures were not followed to be able to arrest a civil servant; he was then released in the middle of the street and left to find his own way home.