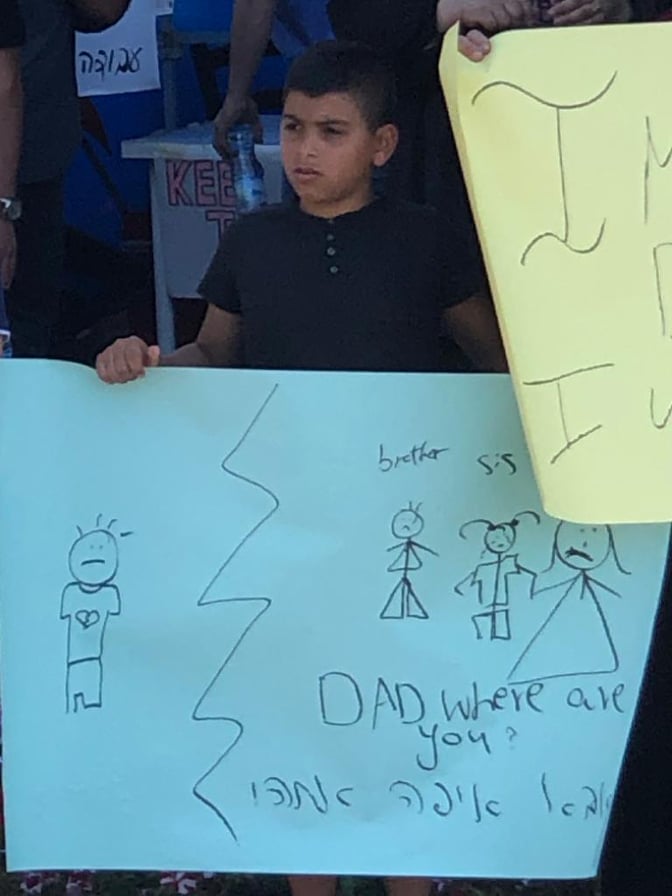 On Tuesday morning, 1/3/2022, a demonstration denouncing and rejecting the adoption of a law preventing family unification (the Citizenship Law) was organized in front of the Knesset building with the initiative of the Mossawa Center and the Committee for Families Affected by the law.

This came in conjunction with the session of the Parliamentary Foreign Affairs and Security Committee, to discuss the Law after its approval on the first reading. The entry of representatives of families, Mossawa Center, and other human rights organizations were coordinated to participate in the session as well.

During the session, MK Mossi Raz of the Meretz party asked a question about the number of people against whom security indictments were filed from the families covered by the Law preventing family unification, intending to refute the right's allegations regarding the renewal of residence permits for them, as the claim was that the non-ratification renewal comes from motives and security reasons, as they put it. MK Raz also pointed out that the data carried out by the representatives of the Ministry of Interior in this committee is misleading and has been presented inaccurately, and it does not reflect the actual facts and figures of the families.

In his intervention, Taysir Khatib, a representative of the Committee for Families Affected by Law, referred to the families' daily suffering. However, far-right MK Avihai Shikli interrupting him, calling him a terrorism supporter and as he was emphasizing that "the city of Acre cannot turn into a Jenin." Tayseer Khatib added that his family experience is similar to all families who suffer from racist Laws.

This experience is full of difficulties and hardships in obtaining a job, renewing residence, and living together in a decent life under one roof. He stressed that equality only comes when the feeling of fear in his children stops from not renewing their mother's residency.

He addressed the committee, saying: "We are the families who suffer from a law that prevents family unification. We want a decent life for our families. I am not here to ask for mercy and sympathy from anyone, but I am talking about our basic right as families." He added, "You talk about security motives, while families talk among themselves about simple life matters, such as: getting a job, a driver's license, traveling, and living in dignity and freedom."

Asmahan Jabali, representative of the Committee for Families Affected by the law and who herself suffers from the injustice and racism of the law, spoke in her intervention about the material and social difficulties experienced by families, the majority of whom live below the poverty line and also called for the imposition of oversight on the brutal bureaucratic policies.

In his intervention, MK Abihai Shikli from the Yamina party addressed to the representatives of the affected families by describing them as supporters of terrorism, pointing out that the Law aims to protect the state's internal security.

Representative Aida Touma Suleiman spoke of the Joint List in her intervention on the impact of the Law on the daily lives of families, "It seems that there are undeclared parties that work only to "disturb" their lives and keep them in the bureaucratic process, for example, when appointments are scheduled to complete the legal papers and access to the government offices, many are canceled, and are refused to receive services."

She added, "We cannot describe the extent to which the most basic human rights are violated in every provision of the law, and it is regrettable that misleading data has been presented to ratify the law."

Dr. Ahmed Tibi, the Joint List, indicated that the term "unification" does not

exist for a people other than the Palestinian Arabs citizens of Israel due to displacement. Previous transfer attempts have failed, and new attempts will fail. He considered that the Arab representatives' support for this Law is immoral and shameful and pointed out that even whoever killed former Prime Minister Yitzhak Rabin was not stripped of his citizenship, and some supported him in the Knesset claiming "humanitarian reasons."

It is noteworthy that the Knesset General Assembly temporarily enacted this Law in 2003, and since then, it has been extended annually. The Law was dropped in July 2021 after families, human rights institutions, and the Mossawa Center's hard work in advocacy. Still, Interior Minister Ayelet Shaked returned and presented the Law before the Knesset's last month. It passed in the first reading and was transferred to the Foreign Affairs and Security Committee instead of the Interior Committee, in order to speed up the approval. Next week, it is expected to be voted on for the second and third readings.

Mossawa Center affirms its rejection of the racist Law, which clearly and blatantly contradicts the most basic freedom and human rights standards. The Center continues to work hard alongside families and human rights organizations to bring down this Law.