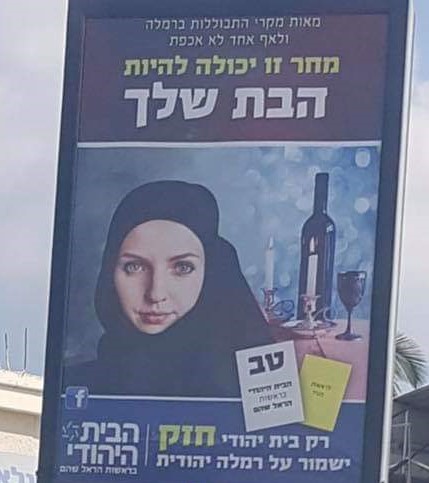 Jewish Home's racist municipal elections campaign in Ramle reads: "Hundreds of cases of miscegenation happen in Ramle and nobody cares. Tomorrow this could be your daughter. Only a strong Jewish Home will keep Ramle Jewish."

Following its approval in the Israeli cabinet, the so-called “Cameras Law” has been blocked before its first reading in the Knesset.

On Sunday, September 8, the Israeli cabinet approved legislation that would allow parties to appoint party members to film voters on Election Day. Drafted by Prime Minister Netanyahu’s Likud party on the basis of categorically dubious claims of voter fraud in the Arab community, the bill was intended to bypass the Central Elections Committee’s decision to ban the use of cameras in polling stations aside from those used by appointed inspectors filming the counting of the votes. The Arrangements Committee in the Israeli Knesset, however, refused to approve expediting the legislation process, putting up a major roadblock to the bill’s passage before Election Day.

For the first time in history, Israel will go to the elections twice in one year. The first set of elections took place in April, following the dissolution of the Knesset in December, where Prime Minister Netanyahu was unable to form a government, which precipitated yet another round of elections that will take next week on Tuesday, September 17.

Considering the timing of the legislation, which the Israeli cabinet approved nine days before the elections, it is clear that the prevention of voter fraud is not the primary motivation behind the bill. The Likud party has claimed that the April elections were “stolen” by voter fraud in the Arab community and has promised to monitor Arab polling stations, as it did in the April elections. The only proven cases of voter fraud in the last elections, however, benefited Likud. Through this last minute maneuver, the Likud party is not aiming to ensure free and fair elections so much as it is seeking to intimidate and thereby reduce Arab voters, draw attention away from the Prime Minister’s looming indictments, disrupt the campaign strategies of the Likud’s opponents, stoke fears of voter fraud and thereby increase Likud voter turn-out, and win cheap votes by inciting against the Arab minority.

The Likud party has succeeded in stoking fears that Arabs will commit fraud in the upcoming elections—a claim that has no empirical backing.

As evidenced by Likud MK Miki Zohar’s remarks in the Arrangements Committee debate — during which he told Joint List MK Ahmad Tibi that the “Jewish race is a special race” and to “deal with it” — it is clear that the bill is also spurred by racism. Later, in a TV interview, Zohar, who is the Chair of the Arrangements Committee, clarified that he had not meant to suggest that the “Jewish race” was superior, however, he continued by claiming that “what flows in the DNA of the Jewish people is something special.”

The Mossawa Center has made efforts to combat this thinly veiled attempt to disenfranchise Arab voters. In recent days, Mossawa has sent letters to the Head of the Central Elections Committee, the Attorney General, and each member of the Knesset to urge them to push back against this anti-democratic, discriminatory legislation. In the letters, Amir Toumie, the Mossawa Center’s Knesset and Government Relations Coordinator, highlighted the disingenuous nature of the legislation, which obfuscates the real intention behind the bill, that is to incite against the Arab community. The letters also emphasized the illegal nature of the bill, which contravenes Israeli Basic Law on the "Electoral System" which safeguards equality and privacy in elections. Moreover, the letters examined the implications the bill has on democratic principles, seeing that it would discourage Arab citizens from participating in the elections at all. The Director of the Mossawa Center also appeared on national television in order to combat the Likud party’s disinformation campaign.

With less than a week before the elections, the legislation has already severely undermined democratic principles.

Likud is expected to continue its efforts, both through standard legislative procedures as well as by lobbying the Central Elections Committee, to change its regulations. In fact, even before the Arrangements Committee voted on expediting the bill, MK David Bitan (Likud) organized a meeting with the Committee’s Chairman in order to explore alternative routes through which Likud could monitor and film voters.

With less than a week before the elections, the legislation has already severely undermined democratic principles. The Likud party has succeeded in stoking fears that Arabs will commit fraud in the upcoming elections—a claim that has no empirical backing. Meanwhile, the legislation and the debate surrounding it has resulted in the further alienation of the Arab community from state institutions, the electoral process, and much of Israeli society. Additionally, Likud now has fodder for its claim that votes were “stolen,” a claim that has the potential to further entrench the extreme right’s increasingly authoritarian tendencies.

With the elections fast approaching, it is of the utmost importance that the international community takes a firm stance against the extreme right’s racist attempts to undermine democratic institutions and to disenfranchise the Palestinian Arab community. While the Likud party’s threats to democracy persist, the Mossawa Center would like to urge the international community to join us in calling on the Central Elections Committee and the Israeli government to uphold their duty to ensure free and fair elections on September 17.