The Arabs are not expected to "turn out in droves" 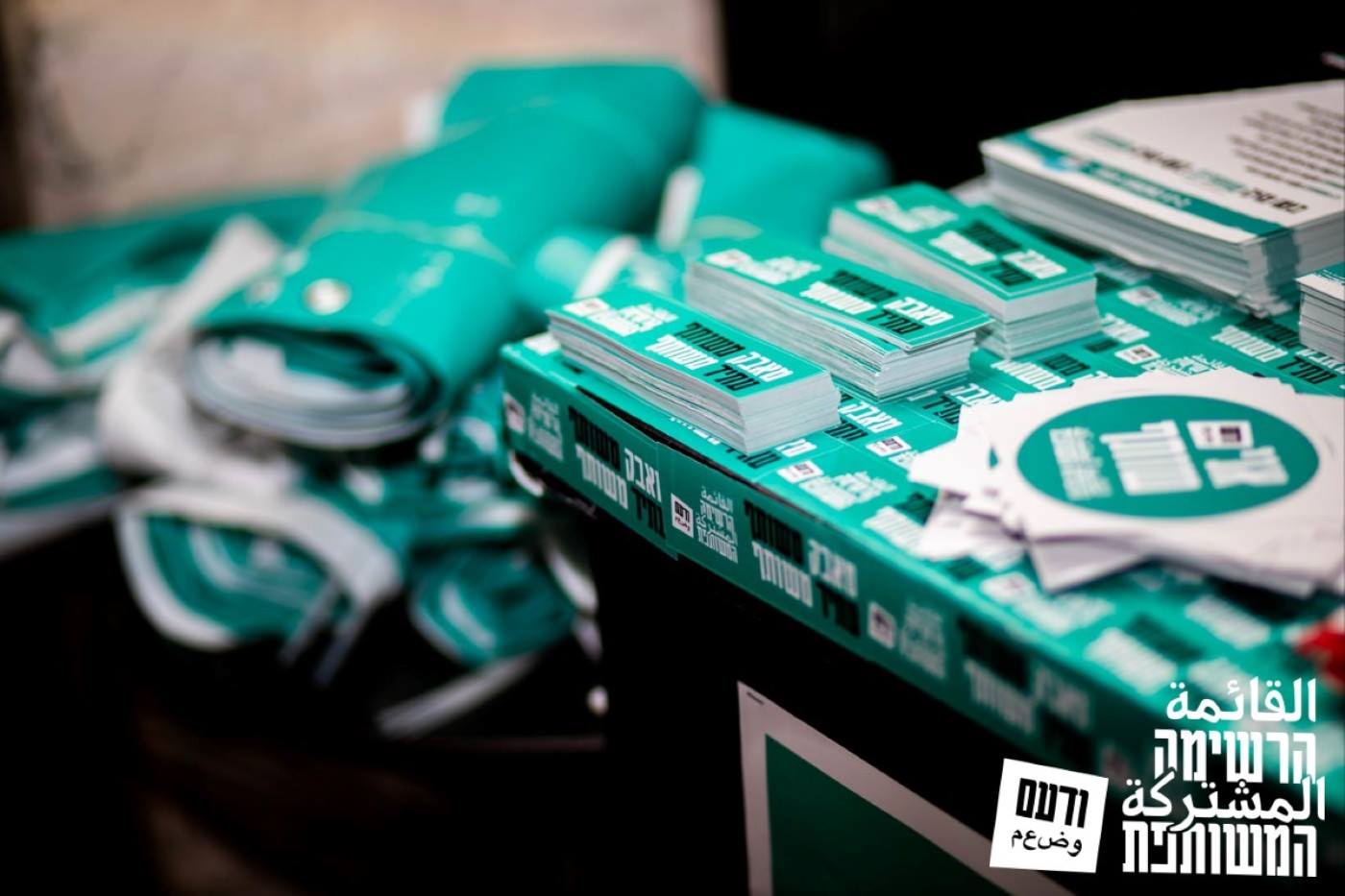 In the upcoming elections, the political parties representing the Arab Palestinian community in Israel will face both low voter turn-out and a continued drift of votes to Jewish parties.

‍With the Israeli elections only a few weeks away, the parties that represent Arab citizens of Israel are woefully unprepared, and Arab voters remain doubtful of their ability to influence the national agenda. Disillusionment likely worsened last week when Joint List Chairman Ayman Odeh’s proposal to join a center-left government coalition - provided certain conditions were met including the establishment of a Palestinian state, ending the occupation, repealing the Jewish Nation-State Law – was quickly and vehemently rejected by senior officials of the leading opposition party, Kahol Lavan.

Since 1996, Arab parties have had greater difficulties galvanizing Arab voters.

In the last elections, there were hopes that the Arab electorate will vote en masse, but soon these hopes were shattered, with only 49.2% voting compared to 63% in 2015.  Recent polls ascertain a decrease in the Arab vote, again, a prospect that could further empower Netanyahu and his far-right coalition. Furthermore, the Jewish opposition camp garnered only 45 seats, 16 seats short of the majority needed to form a government. Gantz’s Kahol Lavan and Meretz received close to one seat each in Arab localities. But even this gain, which came at the expense of the Arab parties – who lost three of their thirteen seats in the April elections – did not bring victory to the opposition.

The Joint List will now have to win at least 50,000 votes to maintain the ten seats that the two lists (Balad-Ra’am and Hadash-Ta’al) gained in the April elections.

Over the past two decades, the strength of the parties representing the Arab Palestinian minority has waned. Since 1996, Arab parties have had greater difficulties galvanizing Arab voters. The 2001 direct elections, which pitted Ariel Sharon against Ehud Barak and took place shortly after the outbreak of the Second Intifada and the killing of twelve Arab citizens at the hands of State forces in October 2000 saw a massive call to boycott the elections. Ultimately, only 18% voted, paving the way for Ariel Sharon’s victory. Arab voter turnout has yet to return to the rates it once provided. Although most of the studies carried out over the past two decades have shown a potential for once again reaching an 80% voting rate, this is yet to be achieved.

‍Support for a boycott increased following the collapse of the Joint List in February 2019, as well as following the enactment of racist and discriminatory laws, such as the Jewish Nation-State Law and the Housing and Planning Law. The drop in the April 2019 voting rate was seen as the Arab voters’ punishment of the Joint List’s parties (Hadash, Balad, Ra’am, and Ta’al). Two of the List's component parts, Ra'am and Balad, barely scraped past the election threshold. The parties presented their failure as an expression of the public's desire for the reestablishment of the Joint List. The reestablishment of the Joint List, however, was accompanied by internal wrangling and squabbling over the placement of the parties' respective candidates on the List, which disgusted Arab voters, further alienating them from their political leadership. To date, the target for the upcoming elections has not been set, but no one is talking about fifteen seats anymore.

Optimistic estimates suggest that the battle is for twelve or thirteen seats at most.

Changes in the composition of the reestablished Joint List have led to fears of an even lower turnout than that of the April 2019 elections. The Joint List will now have to win at least 50,000 votes to maintain the ten seats that the two lists (Balad-Ra’am and Hadash-Ta’al) gained in the April elections. In 2015, the Joint List’s goal had been to win fifteen seats. They won thirteen seats. The April elections saw a sharp decline, with the two lists winning a combined ten seats. Certain variables may continue to undermine the ability of the Joint List to win votes. In the April elections, two candidates from the Bedouin city of Rahat were featured on the Arab lists. Together they drew about 13,500 votes. These two candidates, however, have been dropped from the new Joint List. Thus, the Negev has gone from having three Members of Knesset in the 2015 Joint List to one candidate who has been pushed down to the precarious eleventh place on the list. With no candidate representing the city of Rahat, the Joint List will have to work hard to recruit broad support in Rahat, the third largest Arab locality, and in the other Negev localities. As a result, it is expected that more voters will support Jewish parties.

Balad has also been weakened, dropping from four seats in 2015 to two seats in the April 2019 elections. Since April, Balad candidate, former Mayor of Sakhnin and former Head of the Arab Mayors’ Association, Mazen Ghanayem, has withdrawn his candidacy after having been given what he considered to be an unrealistic place on the List. In the April elections, the Balad and Ra'am parties received about 10,000 votes from Ghanaiyem's base in the city of Sakhnin. Now his supporters are sitting on the fence, and the Joint List will have to convince them to get out and vote.

As if this were not enough, Ra’am (the Islamic Movement) in Taybeh, which received 6,000 votes in the previous elections, announced that it is boycotting the elections following the removal of MK Abd Al Hakeem Haj Yahya from the Joint List. In large cities such as Nazareth and Shefa Amr, preparations for the elections have not been felt. In Haifa, the city of Chairman Odeh, there is a pool 25,000 Arab votes. In April, however, only 7,319 voted for Hadash-Ta’al and 1,464 for Balad-Ra’am, less than half of the Arab voters. In Nazareth, the city of two Balad-Ra'am candidates, MK Mtanes Shehadeh and MK Heba Yazbak, Mayor Ali Salem has not provided any support. Together both parties, Hadash–Taal and Balad-Ra’am, received only 18,632 votes in the previous elections out of 57,041 potential voters in the city. In Umm El-Fahm, which is considered a Ra’am stronghold, it was Hadash candidate, MK Yousef Jabareen, who received 12,381 for Hadash-Ta'al, while Balad-Ra'am, which is identified with the Southern Islamic Movement, only received 1,911 votes. In total, less than half of the eligible 34,720 voters went to the polls.

The composition of the Joint List thus presents its leaders with a tough challenge. They are hoping that the voters will come out “in droves” following the reestablishment of the List. This, however, is entirely unlikely. Optimistic estimates suggest that the battle is for twelve or thirteen seats at most.

‍The Drift to the Jewish Parties

Support for the parties representing the Arab public decreased in the previous election.

‍Most people are not aware that there are two other Arab parties running against the Joint List. Neither is expected to pass the electoral threshold, but they are liable to waste thousands of votes. Both the Popular Union, led by Professor As’ad Ghanim, a lecturer at Haifa University, and Karameh and Musawa, led by the journalist Mohamed Sayed, are critical of the Joint List and demand that they be included in the Arab leadership and decision-making processes. A large part of the Arab media provides these parties with extensive, positive coverage in comparison to its coverage of the Joint List.

In addition to votes that will go to the aforementioned parties, the drift of Arab votes to Jewish parties is expected to continue. The head of Israel Beiteinu, Avigdor Lieberman, has understood that running on incitement against the Arabs will not bring him any more than five seats, as it did in the April elections. Instead he has built his campaign on incitement against Ultra-Orthodox Jews in the hopes that doing so might draw seats away from the more secular Kahol Lavan party. Lieberman is also counting on votes from Arab localities, and has recently held a number of election meetings in Shefa Amr in the presence of its Mayor Ursann Yassin and former MK Hamed Amar.

Benny Gantz, the leader of Kahol Lavan, has requested interviews and the dissemination of the party’s campaign on Arab media.

MK Issawie Freij, who is credited with bringing the large number of Meretz votes from Arab localities, suffered a setback following the merging of Meretz with Ehud Barak. Barak was blamed as Prime Minister for the killing of twelve Arab citizens during the October 2000 demonstrations. Kahol Lavan, Shas, the Likud and Habayit Hayehudi are also making efforts to drum up support among the Arab community. Benny Gantz, the leader of Kahol Lavan, has requested interviews and the dissemination of the party’s campaign on Arab media.

Without the Arabs it's impossible to push back against Netanyahu’s far-right agenda, yet with them it's not enough.

‍The latest polls show that the opposition camp will not be able to win the election. A Netanyahu-Lieberman coalition would have a majority with somewhere between 65 to 70 seats. The reestablishment of the Joint List is capable of strengthening the opposition by about three seats. The Arab public understands that in order to defeat the extreme right it is not enough to reorganize the left. It is not just a question of replacing the leaders, but of updating the vision. It is not enough to replace Amir Peretz with Ehud Barak or Benny Gantz. The opposition must present a new vision that the two nations can believe in. The vision of national separation, aggression and incitement are not sufficient to run the country.

Palestinian Arab voters, most of whom interact daily with Jewish Israelis and with the Palestinians in the occupied territories, understand that the two nations need a new vision. A vision that will end the occupation without separating the two peoples. A vision of a democratic space, in which the two peoples will realize their self-determination without occupation and tragedy. A multicultural space, in which tax money will be invested in social justice and not in occupation and war. The unique position of Palestinian Arab citizens of Israel will require them to lead future processes rather than to react to a reality imposed on them.