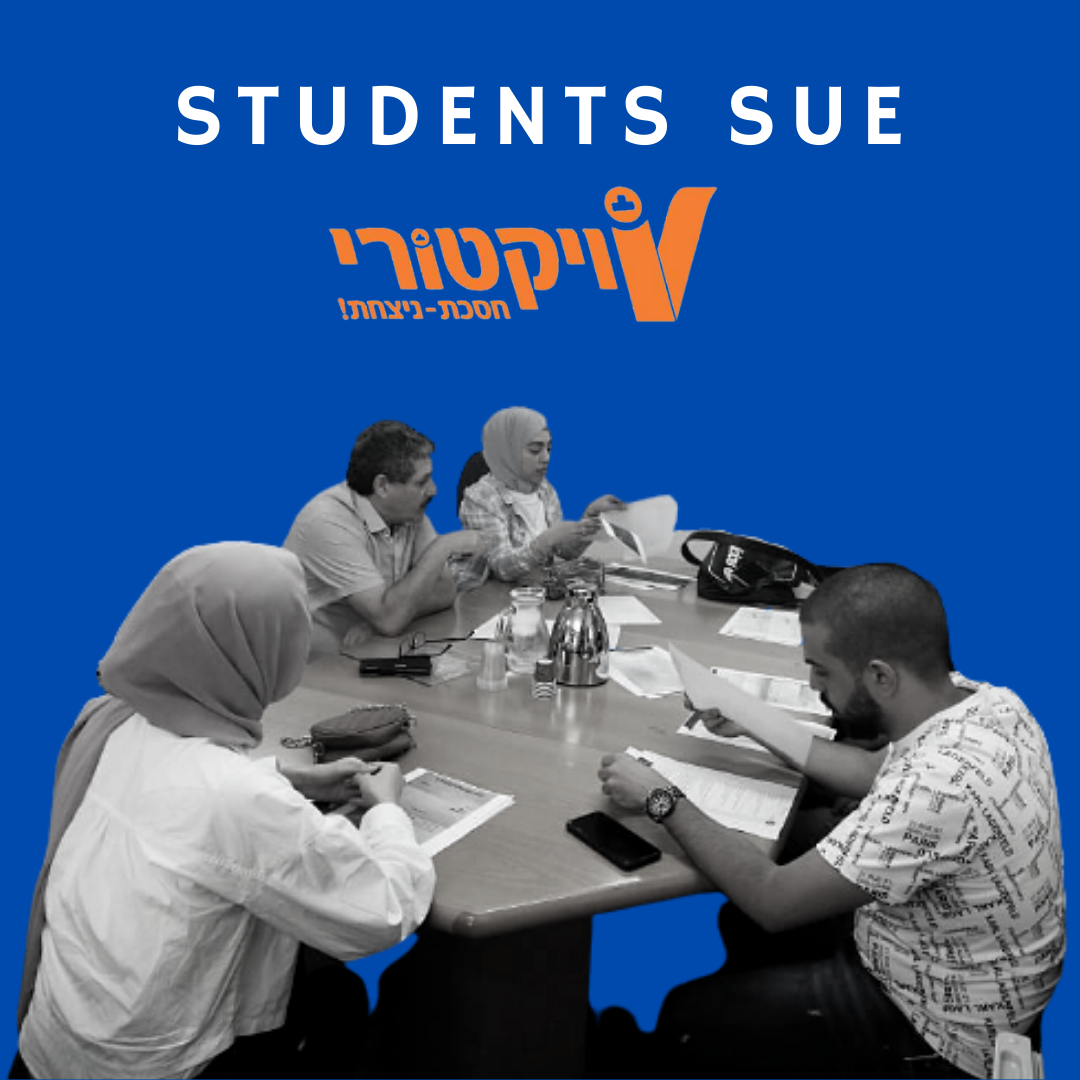 With the help of the Mossawa Center and attorney Wisam Yasin, University students sue Victory supermarket chain for its unjust termination of them in light of the uproar seen across the country in May.

Three university students are suing the popular supermarket chain “Victory” for their wrongful dismissal two weeks ago for 200,000 NIS (~$61,000) at the Regional Labor Court of Nazareth.

The three students, Ahmad Agbaria, Rasha Agabria, and Tamer Darwish are three of six Arab students who were wrongfully terminated by the chain and filed lawsuits with the help of attorney Wasim Yasin and the Mossawa Center. Yasin filed three separate lawsuits on behalf of the three students who were humiliatingly discharged from their jobs without justifiable reason.

Labor Court judge Orit Jacobs in Nazareth set the hearing for next Monday, June 28, and ordered Victory to respond to the lawsuit by June 27. At the hearing, the judge will decide whether to issue an injunction against the company per the request of Yasin. The lawsuit quoted the company’s regional manager as saying to the employees “my God is money,” who also kept the students from arranging a work schedule even before the hearing.

The lawsuit of Tamer Darwish, a software engineering student at the Kinneret Academic College, states that Tamer was “looking for a job to finance his studies” and was hired by the chain as a grocer, working for an hourly wage of 29.12 NIS (~$8.91). In the 6 months he spent at the supermarket, he worked an average of 18 days per month, amounting to about 120 hours per month. From the beginning of his time at Victory until his dismissal, Tamer was highly commended by his peers and superiors.

Between the dates of May 9 and May 15, Tamer had taken days off from work for the end of the month of Ramadan and the Eid holiday following it. On the day of the work strike, Tamer, who is living in Furdeis, stated he was unable to attend work due to the difficult security situation and the number of riots and acts of vandalism in the area. The situation culminated in an attack on Arab staff members of a hotel by rioters, and then attacks on journalists and media workers after no Arab civilians could be found nearby.

"The situation on the Wadi Ara road and Furdeis in particular was known to all, as the traffic almost stopped due to the situation prevailing in Wadi Ara, while in Furdeis the police blocked the exits and entrances to the settlement."

The lawsuit documents correspondence between Ahmed Agbaria and the regional manager of Victory, Natalie Alkobi, who wrote to him "maybe you are right, doesn’t matter," clarifying that this would not change her treatment. Yet, she went to say, "you are draining my pockets which bring food to the table and provide for my kids and therefore you should expect appropriate treatment from me, as those who aren't with me now aren’t with me in the future."

She added, "Ahmed, you let politics get in the way and ruin your chances." Ahmad, however, made it clear to her that his absence was not politically motivated and that "this was the last thing on my mind during that time. I have a family that is worried about my wellbeing and I have studies and dreams that I am afraid of losing, and I am not willing to sacrifice any of these for a job." Ahmad also requested a police escort to work to ensure he would be safe on the way to his job during the challenging conditions. Alkobi replied in even more threatening language, blatantly ignoring the predicament of the workers, "Dear Ahmad, you have lost me. Good luck. You probably will not like the continuation of our association ....!!"

In Rasha Agbaria’s lawsuit, attorney Wasim Yasin stated, “the cold-heartedness in which the defendant and her colleagues were treated is so extraordinary in the scope of a professional work relationship, as the termination of Rasha and her colleagues was long decided on before the ‘ceremonial’ hearings of the employees. The political views of the manager were heavily involved, so much so that they never addressed the defendant personally during the hearing, and resorted to collective punishment and denouncement of those that were terminated.”

Attorney Yasin also added that “the lawsuit deals with a clear-cut case of politically motivated and discriminatory dismissal which occurred as riots, vandalism, and a real threat to human life occurred throughout the entire country, but especially in Tiberias. Moreover, the dismissals were done in blatant violation to labor laws in the country as well as to the basic civil and legal rights of the plaintiffs who are supposed to be citizens with equal rights in a country that prides itself in its democracy and rule of law.”