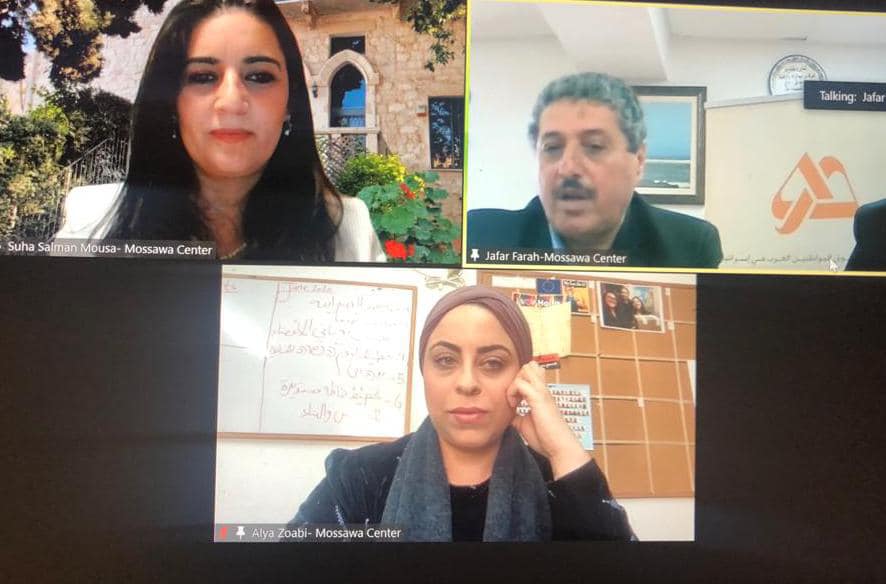 On Wednesday, March 10, the Mossawa Center hosted 30 political attaches, ambassadors, and members of the diplomatic corps in Israel in a briefing about the situation of the Arab community during the COVID-19 pandemic and in the lead up to next week’s elections.

The meeting, hosted in cooperation with the Friedrich Ebert Foundation,  was opened and moderated by Wassim Nasser, Coordinator of the International Advocacy Department at the Mossawa Center, whostressed the importance of the meeting and indicated the Mossawa Center’s readiness to provide critical materials and information to international bodies and institutions, as well as organize field visits to Arab towns for members of the foreign diplomatic corps. Paul Bash and Judith Stillmach spoke of the importance of cooperation between the Friedrich Ebert Foundation and the Arab community through institutions such as the Mossawa Center.

Alya Zoubi, Parliamentary and Legal Advocacy Coordinator at the Mossawa Center, reviewed the Mossawa Center’s work in the fields of legal and parliamentary advocacy, the state budget and economic development, police violence, and home demolitions and land confiscation in the Negev. She also pointed out the political and economic strengths of the Arab community by showing the high number of Arab citizens in Israeli universities (numbering over 50,000), as well as the role of Arab doctors on the front lines during the coronavirus pandemic.

Mossawa Center Executive Director Suha Salman Mousa addressed the current situation of the Arab parties and what possibilities their future holds. She also presented important statistics from the previous elections that indicate a significant drop in Arab voter turnout form the upcoming elections, with polling suggesting it could be as low as 54% compared to 65% in the last elections. She spoke of the importance and effects that Arab voter turnout has on Arab representation in the Israeli Knesset, and outlined the reasons for the Arab boycott of the elections since 2001.

The Mossawa Center’s General Director, Jafar Farah, discussed the patterns of identity voting in Israel and their impact on the election results. He also spoke of the changes that occurred in the Israeli political parties and the nomination of Arabs in Jewish parties, as well as what some of the possible scenarios are for the election results and the composition of the next government.

The meeting was attended by representatives of the embassies of Sweden, Japan, the United States, Latvia, Rwanda, Panama, France, Canada, the European Union, Nepal, Austria, South Africa, Kazakhstan, Ireland, Croatia, Belarus, the Netherlands, Australia, Poland, Spain, Kenya, Uganda, the United Kingdom, and Paraguay. This meeting was a part of the activities of the International Advocacy Department at the Mossawa Center, which puts the issues of the Palestinian Arab community in the spotlight of international institutions.

View Briefing Materials← Back to all news