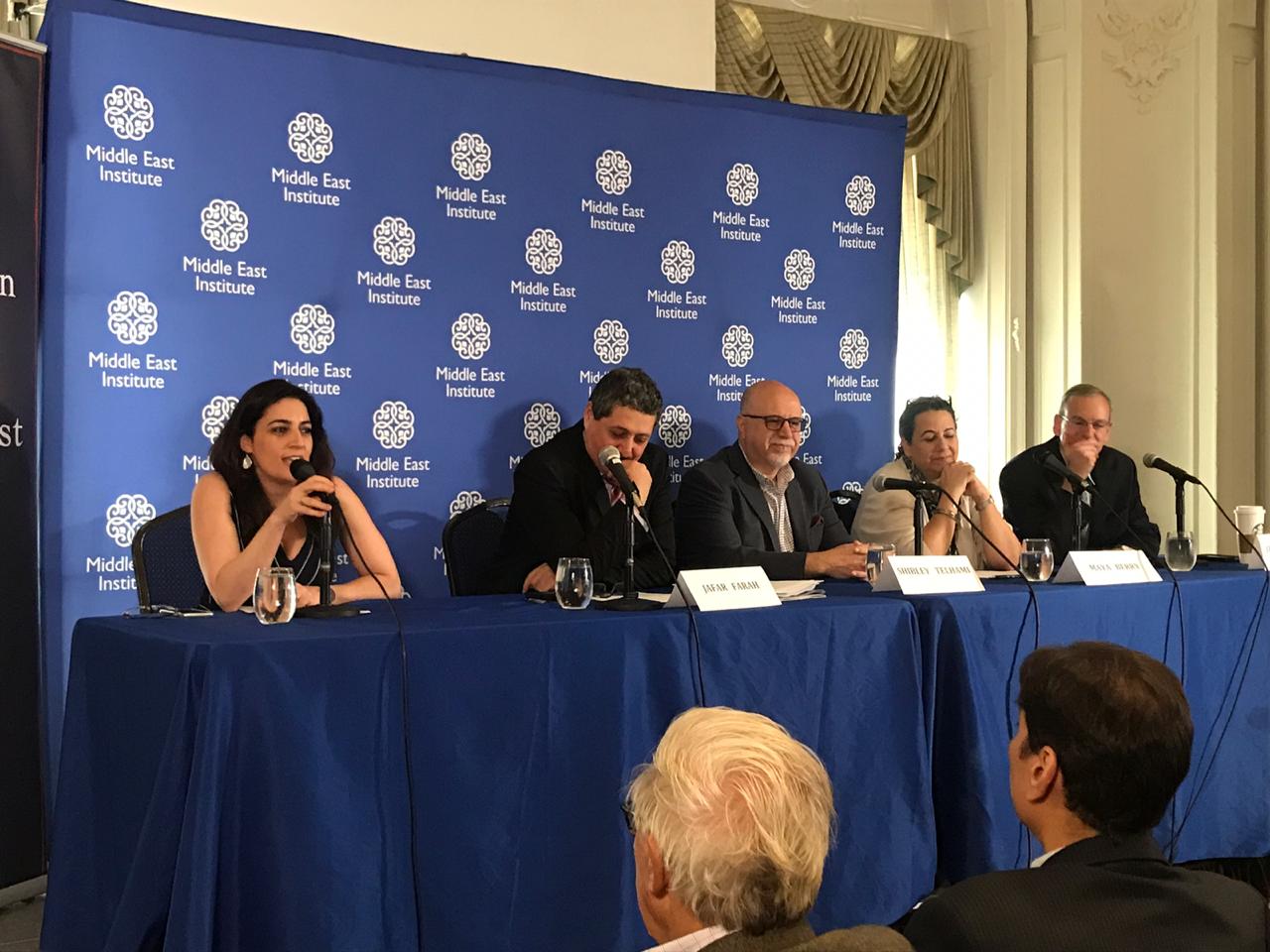 Friends of Mossawa recently returned from a two-week tour of North America during which it brought the voices of Palestinian citizens of Israel into the public discussion in the United States and Canada. Friends of Mossawa (FOM), recently established as the Mossawa Center’s sister non-profit organization in the United States, has members throughout North America. FOM led and organized the tour, holding meetings and events in Washington D.C., Toronto, Ottawa, New Jersey, and New York.

Friends of Mossawa emphasized that any peace plan that does not include the right to self-determination, minority and civil rights protections, and equality for all citizens regardless of ethnic, religious, or national background, is incomplete.

FOM Coordinator, Suha Salman Mousa, and Mossawa Center Director, Jafar Farah, met with policy-makers, members of the Palestinian and Jewish communities, members of Congress, congressional staffers, members of the Canadian Parliament, local community leaders, and engaged citizens eager to learn about the challenges facing the Palestinian minority in Israel. FOM embarked on the tour to educate a North American public on Palestinian citizens of Israel, discussing pertinent topics such as the implications of the Trump administration’s peace plan, the problematics of Israel’s identification as a “Jewish nation-state,” and the shared struggle facing Israel’s ethnic minorities.

In the meetings and public events, Friends of Mossawa emphasized that any peace plan that does not include the right to self-determination, minority and civil rights protections, and equality for all citizens regardless of ethnic, religious, or national background, is incomplete.

In Washington, D.C., the delegation was warmly welcomed at a reception led by Saba Shami, the Chair of the New Dominion PAC. The reception, which took place at Nada and Nazeeh Kiblawi’s Galilee House included a discussion on the implications of Israel’s early elections, which took place in April, and the second round of elections, which is set to take place in September.

Friends of Mossawa was invited by Khaled Saffuri to speak at an event hosted by the National Interest Foundation attended by international actors committed to uplifting Palestinian voices in America. At the event, which was moderated by Khaled Elgindy, Farah emphasized that the role of the Palestinian minority is essential to the achievement of a just and sustainable peace. Panelists also discussed the struggle for equality facing ethnic minorities in Israel.

Farah and Mousa had meetings throughout the week with policy-makers and members of Congress. Notably, Friends of Mossawa had the pleasure of meeting congressman Don Beyer from Virginia and staffers from the offices of Representative Alma Adams, Presidential candidate Senator Bernie Sanders, and Senator Chuck Schumer. Senator Tim Kaine’s office hosted a congressional briefing for Friends of Mossawa to educate staffers from both the House and the Senate, including staffers from the offices of presidential candidate Senator Elizabeth Warren and Senator Diane Feinstein, on topics pertinent to Palestinian citizens of Israel. In Toronto, Farah and Mousa met with leaders of the Palestinian Canadian community who are active in promoting Palestinian rights in Canada. FOM held a public event at the Toronto Palestinian House led by Dr. Nazeeh Khatatbeh and Dr. Ahmad Qais on strengthening and optimizing Palestinian networks. During the event, FOM presented products from the Jisr al Zarqa women’s empowerment project.

In Ottawa, the delegation met with members of Parliament led by MP Marwan Tabbara, and the Palestinian Ambassador, Nabil Maarouf. Many of the members of Parliament had visited the region but were hearing for the first time from Palestinian citizens of Israel themselves describe the challenges facing the community. The delegation also met with representatives from the Canadian Global Affairs department. Ambassador Maarouf invited a group of Palestinian leaders and activists in Ottawa to meet with Farah and Mousa to learn about the Mossawa Center’s work and to discuss future cooperation.

At the invitation of Maher Abd El Qader, Dr. Mahmoud Aqel, and Dr. Saif Titi, Palestinian Americans gathered in Paterson, New Jersey to hear Jafar Farah speak about the Mossawa Center and its work, as well as its vision for peace and the role of the Palestinian minority in the peace process.

In New York City, Friends of Mossawa met with civil society representatives in the United Nations through the Church Center for the United Nations, calling upon them to promote minority rights in their efforts to promote the rights of Palestinians. Riyad Mansour – the Ambassador of the Palestinian Mission to the UN also met with the delegation to discuss the recent political developments in the region.

The delegation also met with Rabbi Rubenstein, the director of the 92 nd Y, the largest Jewish community center in New York, to discuss opportunities for future collaboration. FOM’s last event took place at Temple Israel of New Rochelle. Farah called upon the audience to reject the State of Israel’s insistence on second-class citizenship for Palestinian minority and to join the fight for the civil rights of Palestinian citizens of Israel. The event was moderated by Howard Horowitz who emphasized the importance of exploring alternative narratives and experiences in order to better understand the realities in Palestine and Israel.

The success of this tour would not have been possible without the hard work and support of our network and Friends in the United States and Canada. Thank you for hospitality and your dedication to Palestinian rights.

"The Deal of the Century: What About Palestinian Citizens of Israel?" Panel Discussion hosted by Friends of Mossawa and the Foundation for Middle East Peace. In addition to examining the ramifications of recent political and legislative developments in Israel and the so-called “Deal of the Century,” panelists Jafar Farah, Shibley Telhami, Maya Berry, Jeremy Ben Ami, and Lara Friedman discuss the central role of the Palestinian Arab minority in promoting the conditions necessary for a sustainable peace and how the international community can support it in that role.