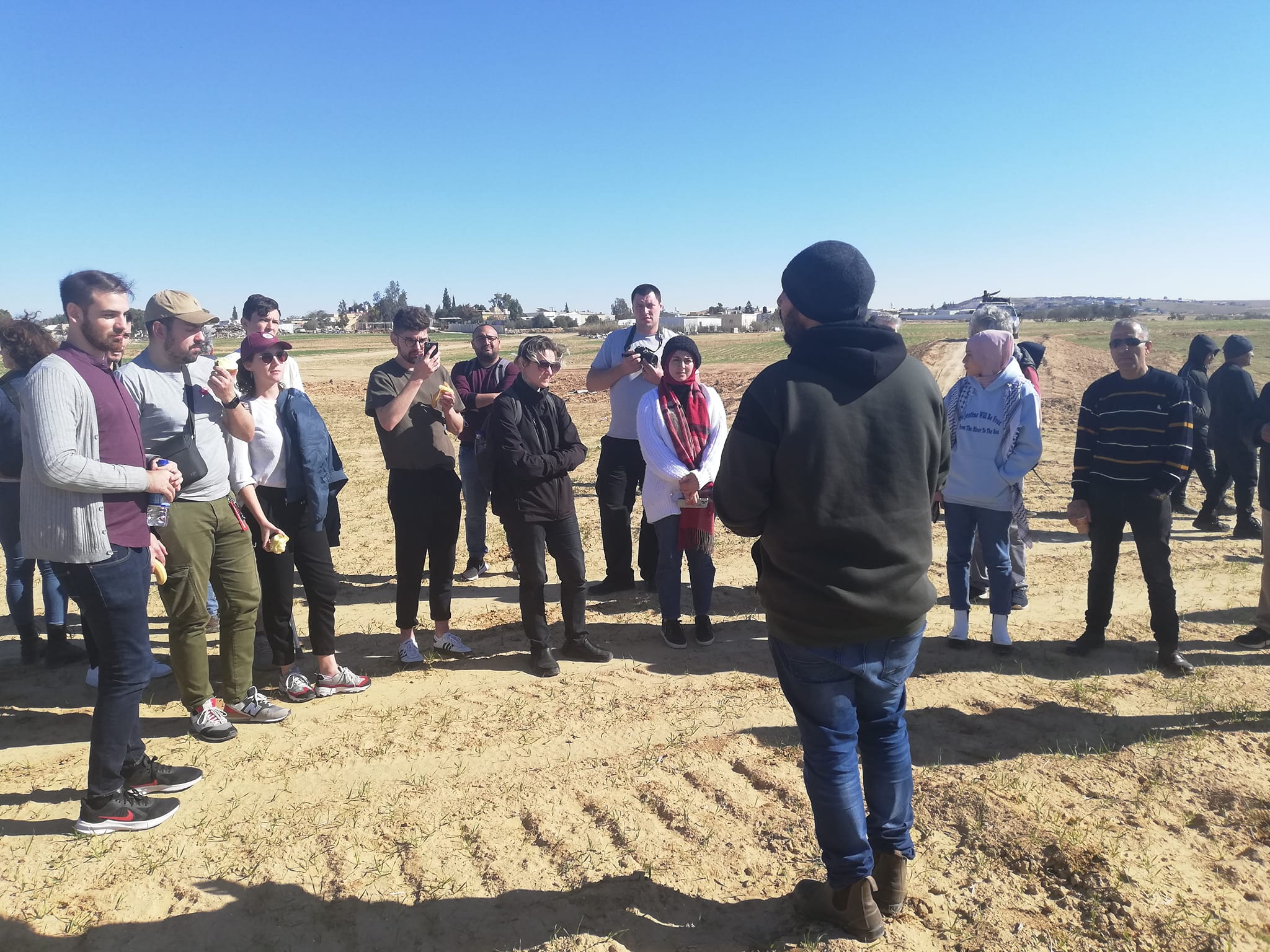 On Saturday, Feb. 12, 2022, the Mossawa Center organized a solidarity tour of the Negev's unrecognized villages, aimed at understanding the people there and the struggles they face.

The visit included Mossawa Center board and staff members, as well as Russian activists and media figures from Haifa and the North.

The solidarity tour began with a visit to Al-Araqib village, which was demolished for the 197th time since 2010. The delegation met with Sheikh Sayah Al-Turi, the village's leader, who briefed them on the history of Al-Araqib village and the ongoing harassment by Israeli authorities, as well as his trial and imprisonment in order to weaken their cause and resistance in the face of demolitions. The delegation toured the village, learning about its historical location and attempts to expel its residents from their land, as well as what remained of the lands near its historical cemetery.

The delegation then visited the village of Sawwat al-Atrash, where they were greeted by elders of the al-Atrash family, who welcomed the visitors and hoped that the Negev issue would be revived.

Later, the Arabs of the Negev Steering Committee briefed the delegation on the current situation in the village, reporting that the State of Israel controls approximately 95 percent of the land, while the Arabs of the Negev own only 5 percent, and that the ongoing conflict and prosecutions are primarily aimed at displacing Arabs in the Negev. Discrimination and racism play a major role in the decisions of the Israeli government, with Jews in the Negev owning agricultural land, factories, and thousands of dunams for agriculture and housing, while Arab residents struggle to secure the most basic rights and services. Arab land is confiscated in order to build national projects such as a new railway, a phosphate plant, and plans for 12 new

Following the recent events in the Negev, Prime Minister Naftali Bennett issued a speech in which he threatened, "if the people of the Negev continue to protest, we will build a separation wall." Our demand to PM Bennett is simple and straightforward: end discriminatory racism and allow us to live in dignity on our land.

The delegation's final stop was at the Women of Lakkiya Association,where they were welcomed by the association’s founder, Dr. Amal al-Sanea Hajouj, who stated that the Bedouin Arabs of the Negev have a natural right to live on their lands, despite the state's deliberate neglect for many years. Dr. Hajouj emphasized that many large projects were established as a result of the Negev people's determination, and this steadfastness was critical in light of the lack of access to the most basic human rights, such as

Huda Al-Sanea provided a detailed explanation of the association's work and its origins in Lakkiya, where women led the initiative to begin making and selling heritage Bedouin embroidery in order to advance women's economic status.

Aden Hajouj, a representative of the Negev's younger generation, spoke about the lack of identity awareness and assimilation in educational curricula, which ignores the rights of children, students, and youth.

Mossawa Director Jafar Farah emphasized that the Mossawa Center is continually working to advance the rights of Palestinian Arab citizens, and that the networking and solidarity visits to the Negev aim primarily to raise awareness of the issue and develop networks among our society's people, as well as to rekindle the cause in the media.