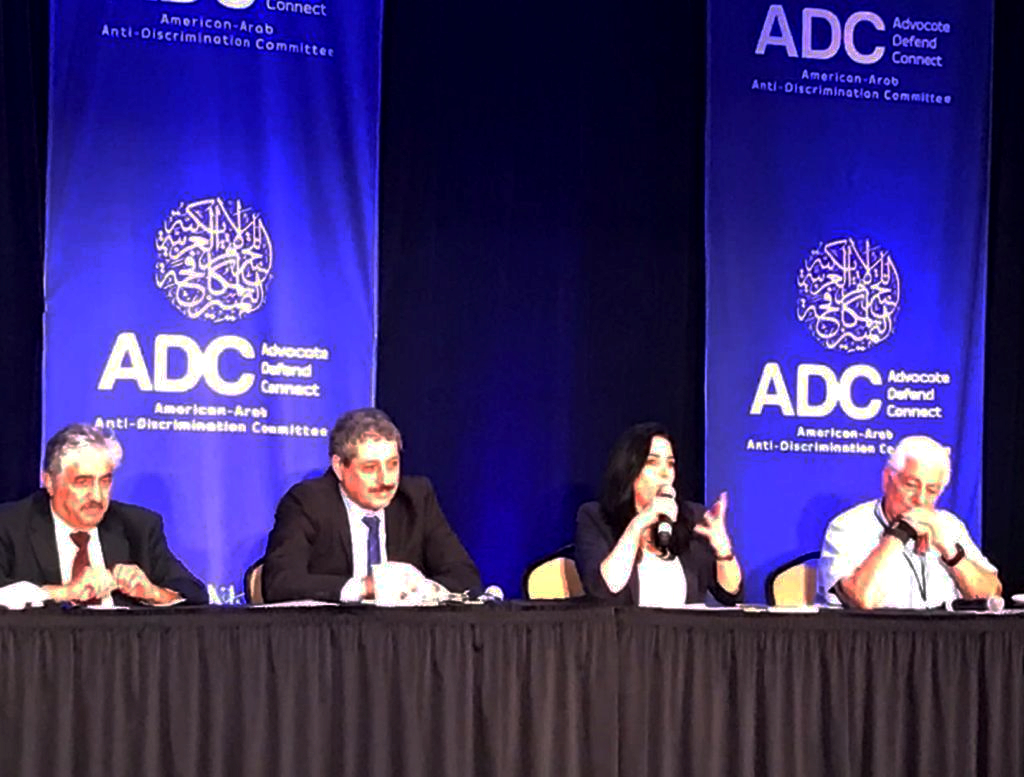 The Mossawa Center called on the Arab-American community to strengthen and expand its political activities to influence American foreign policy in the Middle East, during a conference held by the Arab-American Anti-Discrimination Committee in Los Angeles.

During the conference, ADC Board Member Mr. Majid Khoury welcomed the Mossawa Center and called on the public to get acquainted closely with the Palestinian society at home. The Executive Director of the Mossawa Center and Friends of Mossawa in the United States, Suha Salman Mousa, spoke about the Palestinian community in Israel and the legal, economic, and social challenges it faces in light of the systematic policies of discrimination pursued by the Israeli government through its enactment discriminatory laws and underfunding of the Palestinian community, further exacerbating problems such as crime and poverty in the community.

She also touched on the attacks against Arabs during the demonstrations that took place in May, and the work of the Mossawa Center in the face of mass arrests carried out by the Israeli police and the legal support it provided to those who were physically harmed and unjustly terminated from their jobs.

She stressed that the Palestinian community, despite the difficulties and challenges it faces, has the ability to bring about qualitative change on a local and regional level and cannot be ignored by the international community and decision makers.

The founder and General Director of the Mossawa Center, Jafar Farah, discussed the importance of the Arab-American community’s role and the increase in their organized political action. He pointed to the work of the pro-Israel lobby in influencing American policy through its deep and well-established work on an institutional level. Farah asked the participants to make room for Palestinian institutions from within to put the challenges facing the Palestinian minority in Israel on the table.

Jonathan Kuttab, co-founder of Al-Haq human rights organization and human rights lawyer, presented a book analyzing the status of Jerusalem and the policy of the Israeli government which aims to raze all paths towards a two-state solution.

The conference honored a group of Arab and American activists and media professionals for their role in combating racism and incitement against Arabs in general and Arab Americans in particular.

Friends of Mossawa will expand its activities in the states by building a network of friends in Los Angeles, St. Diego, New York and Virginia.