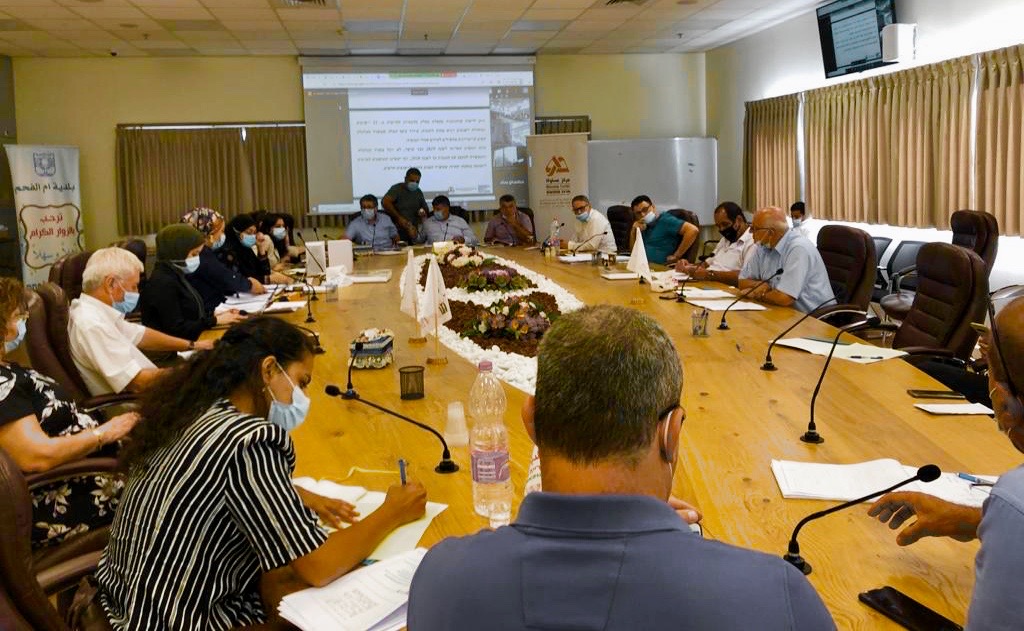 UMM AL-FAHM - The Mossawa Center, in cooperation with the National Committee of the Heads of Arab Local Authorities, members of Joint List's economic development team, and the Friedrich Ebert Foundation held a meeting to in the municipality of Umm al-Fahm on the issue of industrial zones in the Palestinian Arab localities in Israel on Sunday, August 16. The meeting was attended by over 30 delegates local authorities, political parties, civil society, and the private sector.

Of the NIS 11 billion (~ $3 billion) generated annually from business property taxes in Israel, a measly NIS 200 million (~ $66 million) are allocated to Palestinian Arab local authorities, with the rest going to Jewish local authorities.

The session was opened by Suha Salman Mousa, the Executive Director of the Mossawa Center, who  emphasized the importance of industrial zones in Arab localities in providing not only job opportunities for Palestinian Arab citizens of Israel, but also strengthening the ability of local municipalities to provide services for their residents. Additionally, she noted that the Mossawa Center has chosen poverty and industry to be the focus of its work in the coming years due to their critical status in the Palestinian Arab community. The Program Coordinator at the Friedrich Evert Foundation, Judith Stelmach, spoke about the importance of economic development in Arab towns from the standpoint of social justice adopted by the German Foundation.

A ministerial plan from 2018, worth NIS 3 billion (~ $1 billion), for the development of Palestinian Arab localities did not receive any funding from the Ministry of Finance.

Jafar Farah, the Director of the Mossawa Center, discussed the detailed work plan for developing industrial zones in 31 Arab cities such as Nazareth, Umm al-Fahm, Shefa Amr, al-Taybeh, and more. He addressed the ministerial plan to evacuate small industry from Arab towns, costing local municipalities over NIS 100 million (~ $30 million), and set up plans to develop service and commerce areas in towns that were not covered in previous government decisions.

He revealed that of the NIS 11 billion (~ $3 billion) generated annually from business property taxes in Israel, a measly NIS 200 million (~ $66 million) - Less than 2% - are allocated to Palestinian Arab local authorities, with the rest going to Jewish local authorities. This is due to the Israeli government's deliberate and systemic discrimination and neglect towards the Palestinian Arab citizens of Israel when it comes to the development of industrial zones in Arab localities. Moreover, a NIS 3 billion (~ $1 billion) ministerial plan from 2018 for the development of Palestinian Arab localities did not receive any funding from the Ministry of Finance.

Knesset Member Dr. Yousef Jabareen pointed out, "we must go to the courts to oblige planning bodies that prevent the development of our towns to appoint Arabs. Governmental authorities deprive our Arab towns of industrial zones, which are vital for their development, and affect the development of the entire Palestinian Arab community. Industrial zones affect the incomes of our local authorities and strikes opportunities to improve their progression in the socio-economic ladder." Knesset member Dr. Mtanes Shehadeh added, "we will follow up on the issue of industrial zones within our work in the Knesset's Economic Affairs Committee, which has been neglected by the government for many years due to its importance in providing job opportunities and collecting independent funding for the Arab local authorities."

The meeting concluded with tasks being distributed among the attendees, with the readiness of industrial zones projects in Arab localities will be examined and presented to the Ministries of Economy and Finance. Moreover, meetings will be held with those ministries along with the Ministry of Civil Equality in order to advocate that funding is allocated, in addition to meeting with the Ministry of the Interior in order to discuss the obstacles that planning bodies put in the way of Arab localities. At the Mossawa Center's initiative, a Industrial Zones Task Force was established to develop industry in the Arab community. A follow-up team was formed to pursue the issue of industry, coordinated by the Mossawa Center's Parliamentary and Legal Advocacy Coordinator Alya Zoabi, with representatives from the National Committee of the Heads of Arab Local Authorities, the Umm al-Fahm municipality, and the Knesset Members.