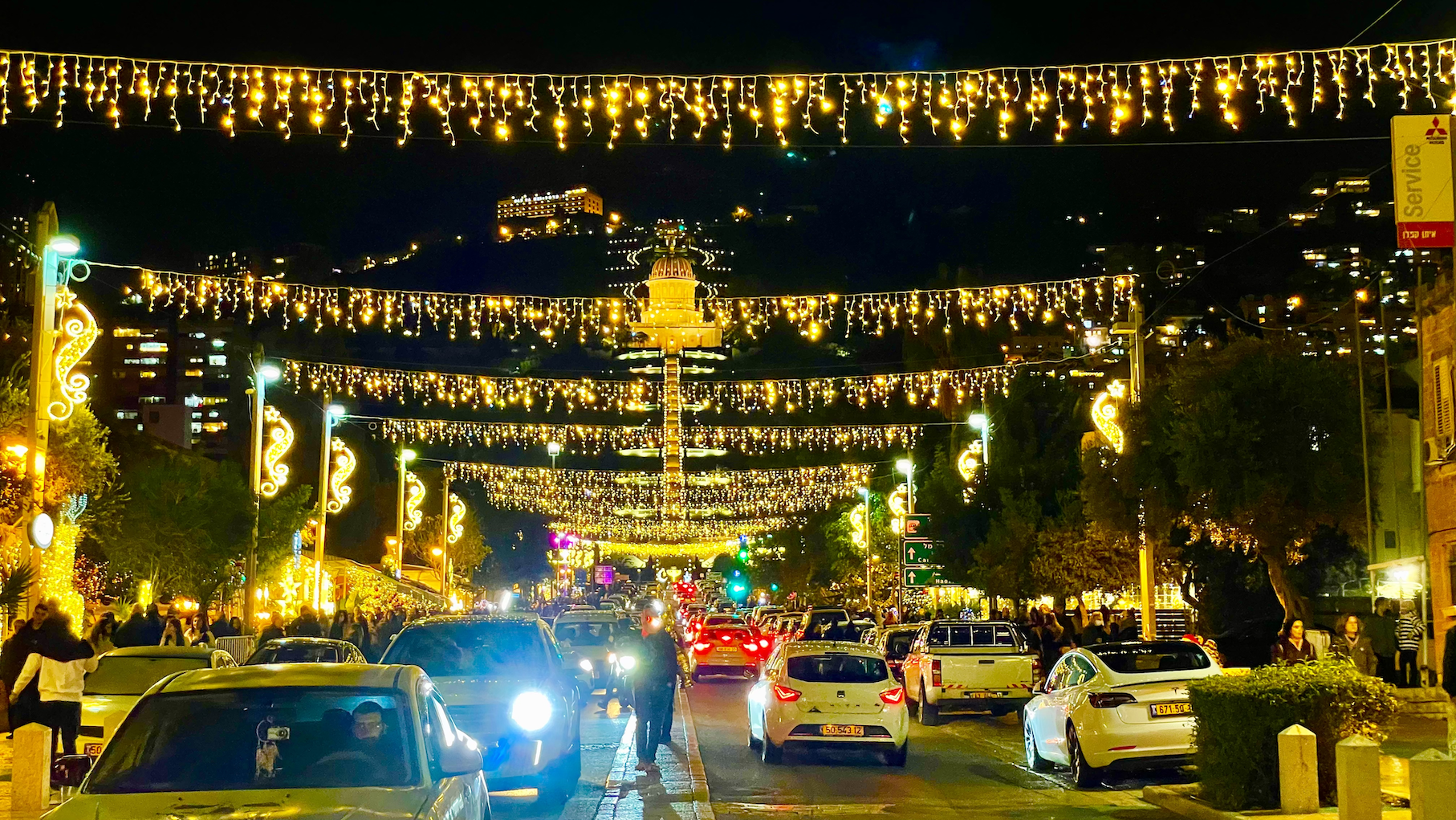 It’s hard to believe that the same streets in Haifa that are now filled with lights, decorations, and a lively Christmas atmosphere, with Jewish and Palestinian residents alike taking in the holiday spirit, were the site of shattered windows, smashed cars, vandalized shops, and the blood of those very same Palestinian residents after Jewish-supremacist mobs rampaged through the city’s mixed neighborhoods in May.

A year that began with an existential threat to the lives of Haifa residents ends in a festive atmosphere as tens of thousands visited the Palestinian neighborhoods of Haifa to bask in the holiday cheer if the bloodshed and violence of Black May this year never occurred.

The violence we saw earlier this year was a direct attempt by then Prime Minister Benjamin Netanyahu to blow up life in mixed cities such as Haifa, Jaffa, Lod, and Ramla to salvage his premiership. He did this by empowering and legitimizing the most radical and extreme forces in the Jewish and settler spheres. This is nothing new, however - mixed cities have been the target of a relentless onslaught by extremist settler organizations for almost two decades now.

Violent, Jewish supremacist organizations such as Lehava and Kahana Chai sought to repeat the explosion of violence seen in Acre in 2008 this past May.

Ever since Israel’s unilateral 2005 withdrawal from Gaza, these settler organizations have turned their attention to Judaizing the few remaining mixed cities in Israel, particularly in cities with a large Palestinian minority like Acre. They have done this by making the lives of the cities’ Palestinian residents as miserable as possible. Just three years after the withdrawal, riots broke out in the mixed city of Acre between radical, Jewish settler groups and the city native Palestinian inhabitants. Over the span of a week, over 30 homes were damaged, with three Palestinian homes being burned beyond recognition. 100 cars and 80 shops, both Jewish and Palestinian owned, were ravaged. In the end, however, it was the Palestinian community that bore the front of police indictments.

Violent, Jewish supremacist organizations such as Lehava and Kahana Chai sought to repeat the explosion of violence seen in Acre in 2008 this past May. As Palestinians took to the streets in peaceful demonstrations throughout Israel’s Palestinian and mixed cities, they were met with an overblown police response. In Haifa, the police – in line with the former Minister of Public Security Amir Ohana’s orders – blew up the demonstrations with excessive force.

Meanwhile, buses of Lehavah and Kahane Chai supporters were on their way to Haifa. That same afternoon, Jewish and Palestinian leaders met at the city council with Haifa Mayor Einat Kalisch-Rotem, warning her of a “black night” should the racist mobs be unleashed into the city’s Palestinian and mixed neighborhoods. The police department did not attend the meeting. That same evening, as the buses arrived at the outskirts of the Palestinian neighborhoods, carrying dozens of rioters, the Palestinian residents organized in their neighborhoods of Wadi Nisnas and Halisa.

In addition to drawing many strong parallels to the violence in Acre over a decade prior, the events in May were also a significant escalation as they were fueled by relentless incitement by Israeli officials and politicians and the empowering and legitimization of radical supremacism at the hands of Prime Minister Netanyahu over the years.

The police closed off the mixed neighborhoods, including the German Colony and Wadi Jmal, and marched with the Jewish mobs attacked and rioted with full force throughout the neighborhoods’ streets, some armed with guns. They attacked Palestinian residents, houses, cars, property, and businesses.

Scenes of absolute horror as Israeli mobs descend upon the streets of Haifa, attacking Palestinians and destroying Palestinians’ cars. pic.twitter.com/0KseIhtleF

In one neighborhood, racist rioters attempting to break into Palestinian homes were met with Palestinians ready to protect their homes. Only then did the police intervene to prevent a civil war from starting. In other words, only when the Palestinian resident defending their homes began to show force in their resistance did the Israeli police stop the radical racist rioters.

These scenes of radical supremacist mobs rioting in the streets of mixed cities as Palestinian residents were hiding in their homes fearing for their life were repeated in Jaffa, Lod, Ramla, and other mixed cities. In addition to drawing many strong parallels to the violence in Acre over a decade prior, the events in May were also a significant escalation as they were fueled by relentless incitement by Israeli officials and politicians and the empowering and legitimization of radical supremacism at the hands of Prime Minister Netanyahu over the years.

A common theme during the violence in 2008 and 2021 was the perception among the Jewish-Israeli public to those events. Since the inception of the State of Israel in 1948, Jews have always viewed themselves as detached from the Middle East; that is, they are disengaged from the Middle East, the various peoples that live in, its rich cultures, languages, and history. They treat Israel as though it is a part of Europe, not the Middle East.

When their Palestinian neighbors (quite literally) were under attack, Israelis viewed the violence as something happening to distant Palestinians in the West Bank in Gaza. There is little solidarity from the general Israeli public towards their Palestinian neighbors in Haifa, Lod, and Ramla. This apathy and indifference were also seen in Haifa Mayor Kalisch-Rotem’s lack of response to the violence ravaging her own city’s streets, terrorizing her very own constituents.

The indifference shown by Kalisch-Rotem and Haifa’s Jewish residents reflect an overt consensus among the Israeli public regarding its relationship to the Middle East. They came to the Middle East yet pretend not be a part of it.

Interestingly, however, cities such as Nof Hagalil (formerly Nazareth Elite) which sits right next to Nazareth, the largest Palestinian city in Israel, and is normally the site of such anti-Palestinian violence was quiet during May. Despite a third of its residents being Palestinian, Nof Hagalil remained surprisingly quiet and did not experience the rioting seen in Haifa.

Like in Haifa, Nof Hagalil Mayor Ronen Plot met with Palestinian city council members who voiced their concerns over attempts by settlers and racist mobs to incite violence against the city’s Palestinian residents. However, unlike Kalisch-Rotem, who comes from the Askhenazi elites of Israel, Plot comes from the Russian-speaking community comprised of Soviet migrants which, like Palestinian citizens of Israel, is marginalized in Israel. Thus, Plot was much more susceptible to the potentially explosive events that could take place in his city and acted in cooperation with the Palestinian council members to prevent the outbreak of violence.

This pattern was repeated all over Israel. In cities led by mayors who were indifferent to the concerns of their Palestinian resident or outright incited against them – as in the case of the mayor of Lod which saw particularly fierce violence against Palestinians – we saw violent, racist mobs roam the streets freely, often under police protection. This occurred despite the countless warnings of Palestinian public officials and community leaders.

Israeli mob and police try to break into a Palestinian family’s home in Haifa. This is the terror Palestinians are facing right now under the Israeli state. pic.twitter.com/tC4TX2MrPM

However, this perception appeared to shatter recently. Due to global lockdowns, Israelis suddenly found themselves forced to spend the holiday season at home, only to discover that Christmas has been celebrated for decades in their very own backyard. Tens of thousands of Israelis flooded Palestinian cities such as Nazareth and the Palestinian neighborhoods of Haifa to celebrate the holiday season. Many Palestinian recount hearing their Jewish neighbors say “it’s like going abroad” as they walked through the ornamented streets of Nazareth and Haifa, took pictures with the Christmas tree, and dined in Palestinian restaurants. In Haifa, Israelis suddenly discovered the German Colony that was burning just a few months ago.

It is time for Israel and the Israeli public to face the fact that it is in the Middle East. The Palestinian communities in Haifa, Acre, Jaffa, Lod, Ramla, and Nazareth are the face of the Middle East. The Jewish residents of these cities must not deny that. Nor should they erect barriers – physical or mental – to uphold the false curtain they have surrounded themselves with.