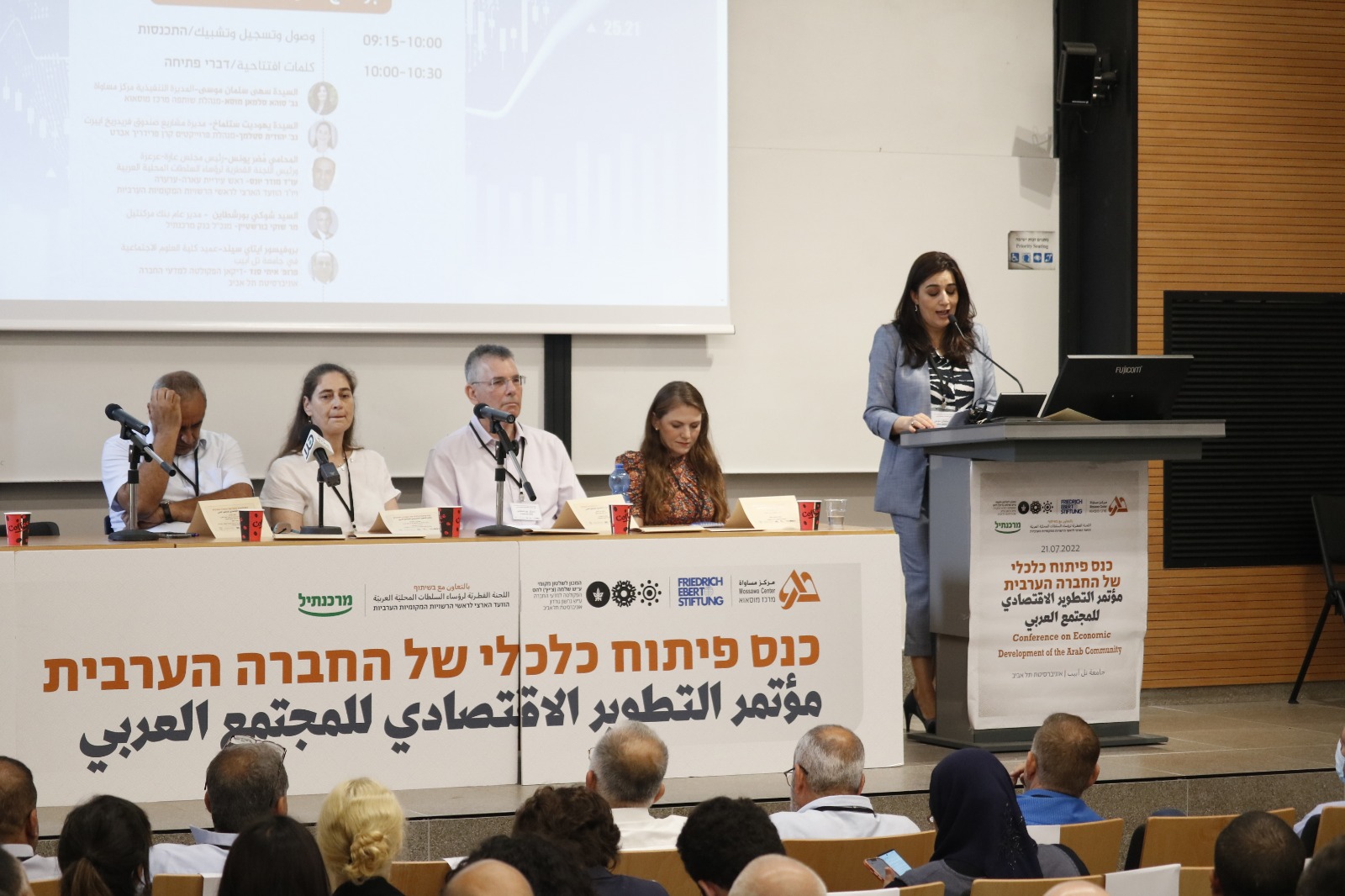 On July 21st, the Mossawa Center hosted the Economic Development Conference at Tel Aviv University. In cooperation with the Friedrich Ebert Foundation, the Institute of Local Government at Tel Aviv University, and the National Committee of Heads of Arab Local Authorities, the conference aimed to address national inequality and discrimination in the state’s budgeting.

The Executive Director of the Mossawa Center, Suha Salman Mousa, called on the Ministry of Finance to allocate immediately all budgets that should finance the programs approved in Government decision 550, she inquired “Where's the rest of the proposed budget? We have been promised six billion NIS and only given 1 billion NIS. Where’s the rest?”

“GR 922 did not succeed in closing the gaps, the government is still behind in transferring the proposed budgets according to GR 550” declared Modar Younis, chairman of the arara-ara council and chairman of the national committee for heads of Arab local authorities. Younis added: “GR 550 is a joint effort, and a step in the right direction, however, a lot still needs to be improved. If the situation is ignored, budgets will continue to be delayed.” Younis also spoke of the vital need to improve public transport. “Transportation is one of the worst areas in the state budget. Almost 20 billion NIS was proposed, and none transferred.” Finally, he spoke of the government’s role in impairing the work of local authorities; “The government frequently undermines local authorities by transferring budgets directly to government companies, and disabling Palestinian-Arab local authorities from taking part in the planning and development of the proposed plans.”

Yehudit Stelmach, director of projects at the Friedrich Ebert Foundation, spoke of the importance of equality; “When we talk of economic development in Israel, we cannot disregard a fifth of the country’s population. We have to incorporate the central value of equality into our discussions, and encourage Palestinian-Arab growth and development.”

Next, Shoki Borstein, general manager of the Mercantile bank, spoke of Mercantile’s active role in supporting and advancing Arab society. “We have invested over 1 billion NIS into Arab businesses, entrepreneurs, and local councils, and we will continue to do so down the line.”

Following, Prof. Itai Sened Dean of the Faculty of Social Sciences highlighted the importance of investing in the human capital in the Arabic community;” The students' majority within the faculty of social sciences in tel Aviv university are Arab students, the percentage of Arab students is much bigger than Jewish students, economic growth starts with investing in the human capital, what needs to be done is finding how are we going to invest in the Arabic human capital for this is our only way to achieve an independent Arabic society that is capable to fight violence and develop its economy.“