Deprivation of human rights: the other pandemic facing Palestinian Arab citizens of Israel 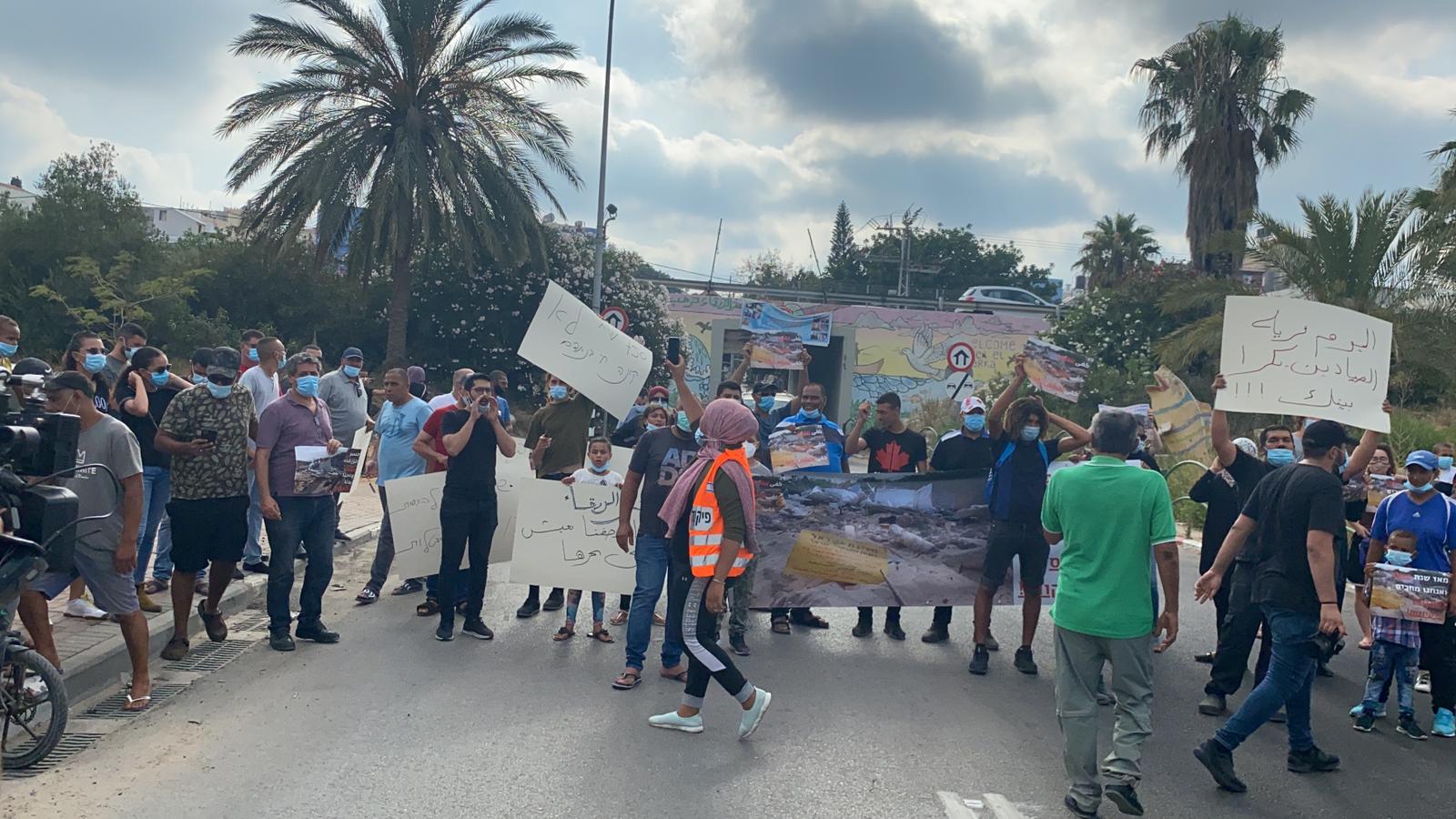 Palestinian Arab citizens of Israel protesting the demolition of a fishing shack in the village of Jisr az-Zarqa.

Over the past several years, advocating for the rights of the Palestinian Arab citizens of Israel has focused on the fulfillment of their equal rights by their Jewish counterparts. In the midst of the COVID-19 crisis, Palestinian Arab society found itself in a state of deprivation – both in terms of human and civil rights – thanks to the policies and actions (or lack thereof) of the Israeli government.

Today marks the 72nd anniversary of the International Human Rights Day, with December 10th symbolizing the day on which the United Nations General Assembly adopted the Universal Declaration of Human Rights, an international document that enshrines the right of every person to enjoy their most basic rights regardless of color, gender, ethnicity, religion, and more.

Human rights vary in accordance several criteria, and are divided into several categories including basic, civil, constitutional, individual, and collective rights. All of the aforementioned rights are being deprived from Palestinian Arab citizens in the State of Israel.

Ever since the establishment of the state, the Israeli government has worked relentlessly to diminish the legal status of its Palestinian Arab citizens. It has consistently worked to limit their political, economic, and social rights by proposing and passing an endless number of discriminatory laws that have restricted the lives of its Palestinian Arab citizens. Among the most destructive of these laws are the Nakba Law, the Citizenship Law, the Kaminiz Law (housing and planning), and the Nation-State Law. Moreover, the absence of a constitution in Israel makes it remarkably difficult to protect the rights of Palestinian Arab citizens of Israel, as there is no mechanism to grant nor ensure their entitlement to inalienable rights. Moreover, it makes it considerably easier for the Israeli government to deprive them of such rights.

The formal discrimination and the diminution of the Palestinian Arab community’s status in Israel is overtly reflected in many ways such as the definition of the state, state symbols, immigration, citizenship, state budget and more. However, it most reflected in discriminatory laws and legal norms as mentioned above. In 2003, Israel enacted the Citizenship and Entry into Israel Law, which was meant to be a temporary regulation yet has been renewed every year since. This law targets families by preventing Palestinian Arab citizens of Israel who are married to residents of the Occupied West Bank and Gaza Strip or countries that Israel considers "enemy states," from living with their spouses inside the borders of the green line. The law casts a collective suspicion over the entire Palestinian Arab population living in Israel and prevents them from exercising their basic human right of freedom to choose a spouse and build a normal family.

The Kamnitiz Law (the April 2017 Amendment to the 1965 Planning and Building Law), meanwhile, criminalizes building violations and intensifies enforcement of the law through increased home demolitions, larger fines, and heavier sentences for offenders. However, Israeli government policies show a clear unwillingness to approve master plans for Palestinian Arab localities and distribute building permits, leaving many Palestinian Arab citizens with no option other than to build and inhabit structures that are not officially recognized (i.e. without a permit). As a result, the Kaminitz Law that deliberately affects Palestinian Arab citizens of Israel disproportionately.

In July 2020, escorted by heavily armed police equipped with assault rifles and bullet proof vests, the Israel Nature and Parks Authority demolished a shack belonging to Ali Jurban, a local fisherman in the Palestinian Arab village of Jisr al-Zarqa – one of the poorest localities in Israel. After the demolition was over, the demolition team and police forces abandoned the site, leaving the local fishermen and owner of the building to clean up the wreckage. Furthermore, the Nature and Parks Authority billed the owner of the building the costs of demolition. Equally outrageous, the owner was not notified of the imminent demolition.

The inhumanity witnessed in the demolition of this building in the fishing village at Jisr al-Zarqa is not an isolated event. This demolition is a direct result of the Kaminitz Law. In addition to the 1965 Planning and Building Law that it utilizes relentlessly to violate the land, planning, and housing rights of its Palestinian Arab citizens, Israeli government continues to confiscate thousands of acres of Palestinian lands in the West Bank and East Jerusalem on a daily basis. Israel uses a number of legal and bureaucratic procedures to justify its actions such as: seizure for military purposes; declaration of state lands; seizure of absentee property; confiscation for public needs; and initial registration.

Today, approximately half of the Bedouins in Al Naqab (Negev– live in 18 established, urban Bedouin townships that are recognized by the State of Israel. The rest live in villages that have not yet been officially recognized and are not regulated by regional or municipal planning and zoning laws. As a result, they continue to live without the most basic services such as water and electricity to this day because the Israeli government still refuses to recognize their rightful ownership of the land despite possessing an Israeli citizenship.

At the same time, the 2010 Individual Settlements Law gave a green light to individual Jewish-Israeli families to take control of hundreds – or at times thousands – of dunams of land for their exclusive use, as part of a policy that seeks to develop the Naqab area. The farms that they establish engage in different productions including cheese and wine. The Ministry of Agriculture provides the settlements with water, the Israel Electric Corporation connects them to electric grid, and the government provides legal tools for the recognition of these settlements.

Little has been done to truly reform the policing and justice systems in Israel which allow these senseless killings to take place. Officers involved in incidents of violence are often granted legal immunity and cases for criminal charges are closed without conclusion. Two of the officers involved in the events of October 2000 were released from duty but all cases against any of the officers were closed without trial. Then-Attorney General Menachem Mazuz granted the officers immunity despite the Or Commission’s findings that the shootings and killings were illegal.

In addition to legal discrimination, the Palestinian Arab community in Israel faces economic discrimination. For the past 20 years, the Mossawa Center has been monitoring and analyzing the state budget and formulating the needs of Palestinian Arab citizens. Only about 5% of the state budget is allocated to Palestinian Arab localities. The budget ignores almost all of the needs that Mossawa has noted over the years, as well as the recommendations made by the Ministry of Finance regarding Palestinian Arab society, which were formulated during the last election period and submitted in its report in August before the state budget was approved. The ministry pointed to large gaps resulting from discrimination in education, vocational training, welfare, employment, cultural services, infrastructure, transportation, and housing. Recommendations from the ministry were not submitted to government representatives for fear that the settlers and the extreme right would attempt to thwart what was meant to help not only the Palestinian Arab population, but the country's economy in general.

It is only logical in times of financial crisis and money shortages to seek a loan from your bank to cover your current expenses. Unfortunately, the banks in Israel do not follow that concept. On the contrary, Israeli banks added stricter policies that prevent people from getting a loan to survive financially.

Palestinian Arab citizens constitute about 21% of all citizens of the State of Israel, but the percentage of mortgage loans requests that are approved to them is only 2%, compared to 21% for Jewish citizens.

All this leads business owners to resort to the one and only option to save their businesses: the black market. Loans from the black market reached over NIS 500,000 ($153,000) in value within months of start of the pandemic. People lost their houses, lands, businesses, savings, in addition to social and family problems that followed including divorce, the breakup of families, and at times even leading to people losing their lives.

Despite all these hardships, the Palestinian Arab community in Israel continues to advocate for their rights. At the Mossawa Center, we have been working on analyzing the state budget along with Palestinian Arab citizens' needs for 20 years, in addition to advocating on a local, national, and international levels in order to raise awareness and demand social equality for that community.