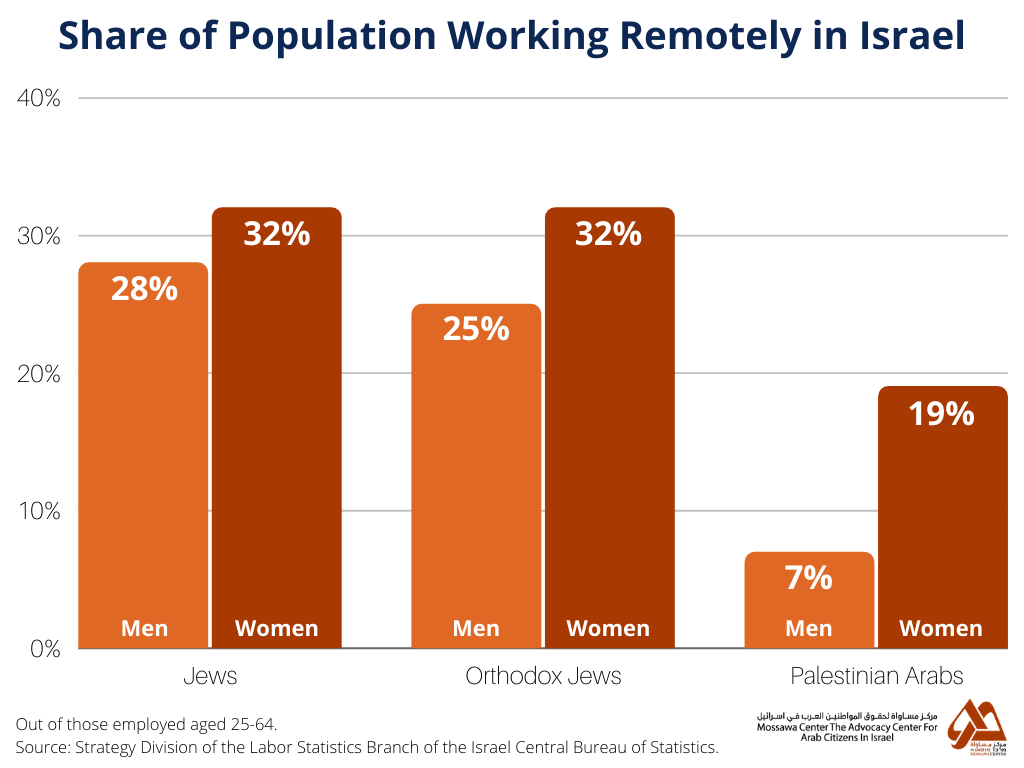 The data shows that only 76% of Palestinian Arabs have access to a computer and the internet, compared to 91% of Jews and 37% of Orthodox Jews. Ownership of computers and access to the internet have a substantial effect on the already limited work possibilities from home.

Mossawa Center Executive Director Suha Salman Mousa says, “the removal of Palestinian Arab women and youth to ‘forced vacations’ is the result of discrimination in the Israeli education system and job market. We call for gaps to be closed in the fields of infrastructure, communications, and electric grids, and an end to the housing crisis in the Palestinian Arab community. The Ministry of Economy has allocated a billion shekels [~$300m] for vocational training in the wake of COVID-19 and we demand that a large part of this budget be allocated to training Palestinian Arab youth and women to quickly reintegrate them into the labor market.”

The unemployment in the Palestinian Arab village of Jisr Az-Zarqa, the poorest locality in Israel, has reached 30% during the COVID-19 pandemic, with over 1,000 families depending on food assistance. The police recorded the highest rate of fines for breaking COVID-19 restrictions in the village, although the Israeli police has been enforcing such fines selectively throughout the country, directing Palestinian Arab localities the most.

Over the past several months, the Mossawa Center has been working on a housing and development program for the fishing village. In the coming month, a NIS 7 million ($~2.1m) state-of-the-art day care center and welfare department will be opened in the village, after years of advocacy by the Mossawa Center in cooperation with the local council.

According to a report by the Ministry of Construction and Housing, only 25% of the NIS 1 billion (~$300m) budget appropriated by the ministry to Palestinian Arab localities over the past 5 years has actually been allocated, and only 4,200 Palestinian Arab families won public tender bids. The report also shows that only 11,700 tenders for apartments have been issued by the administration and the ministry over the past five years. Moreover, only 2,738 apartments were marketed in Palestinian Arab localities under the Price-per-Tenant Program intended to ease the housing crisis, of which only about 1,447 were actually allocated.

"The ratio between the number of tenders and winnings is extremely problematic. Less than half of public tender bids were successful, which means that the conditions and prices do not meet the needs of Palestinian Arab communities," said Jafar Farah, the Mossawa Center's General Director, adding, "Palestinian Arab localities are in need of over 10,000 housing units per year to close the gaps in housing shortages."

Data from the Ministry of Housing shows that out of the NIS 710 million (~$215m) allocated for the construction of public institutions, the government granted permits only NIS 427 million (~$130m), and in practice only NIS 115 million (~$35m) was actually spent. The Mossawa Center demanded that the budgeting, planning, and marketing of apartments be intensified in order to close the housing shortages in PalestinianArab localities. As a result of the backlog and government bureaucracy, people are forced to build without a permit and pay a heavy price in fines, demolition orders, criminal indictments, and legal fees.