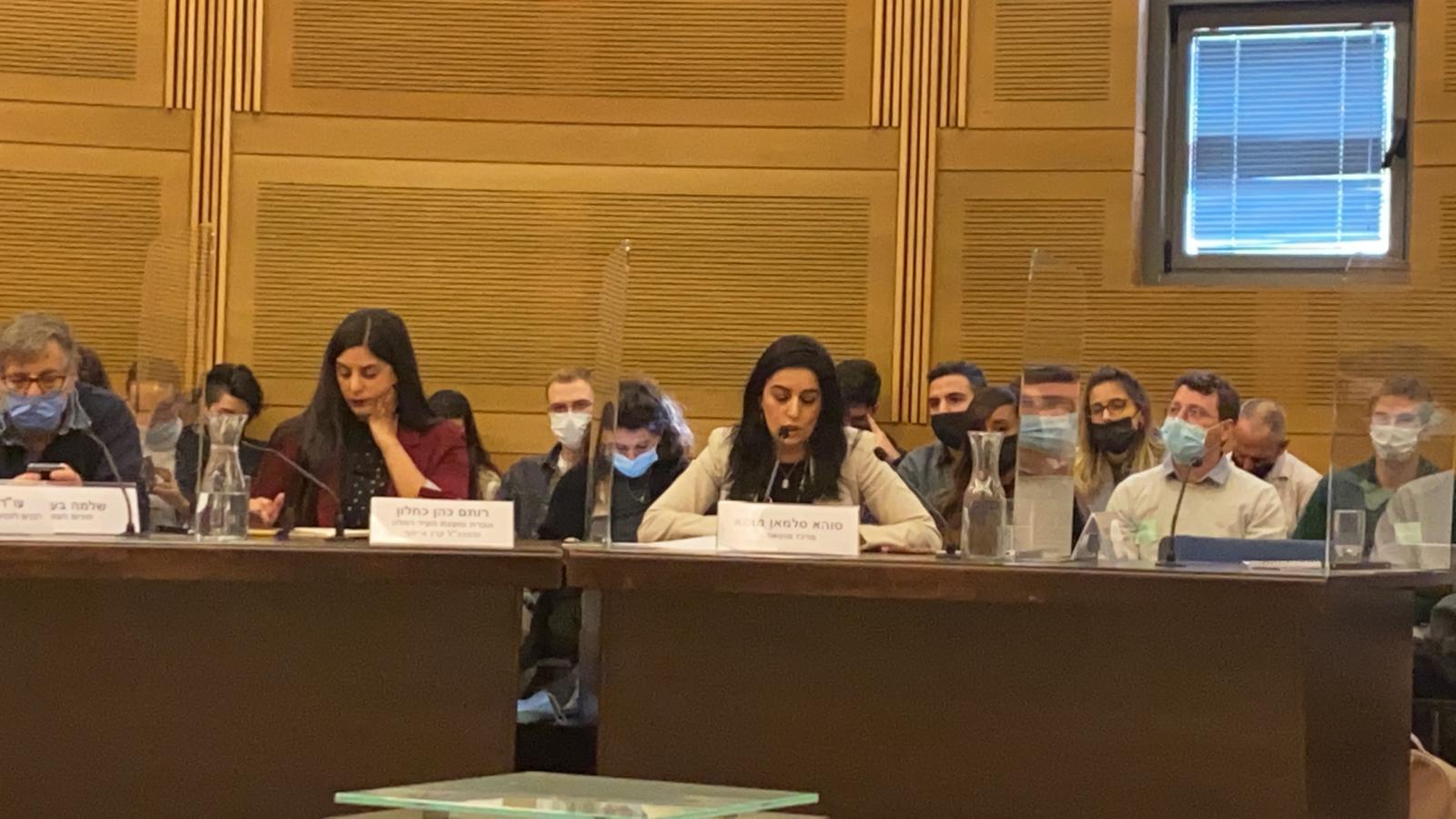 Co-Director of the Mossawa Center, Suha Salman Mousa, called on Knesset members to change the constitutional legal status of Arab citizens of the country at the International Day of Human Rights held in the Knesset at the initiative of MK Michal Rosin and the Association for Civil Rights.

In her remarks, Salman-Mousa referred to the "fundamental rights and the protection of the legal status of Arab society" and noted that the law in Israel discriminates against the rights of Palestinian Arab citizens in Israel, which makes up about one-fifth of the population.

In addition to the Basic Law of Nationality, Israeli law expropriates the assets of Arabs, and unjustly distributes land for the establishment of Jewish settlements, expelling about 100,000 Arab citizens from the Negev.

In terms of socio-economic rights, around half of Arab society lives below the poverty line, about 32% of road accident victims are Arabs, infant mortality rates and mortality are high, and only about 2% of mortgage recipients are Arab citizens.

Socio-economic rights and the right to equality in the allocation of state resources have not yet been exercised. The plans of Bezeq, an Israeli telecommunications company, to deploy high-speed Internet will cover about 90% of the Jewish households, but only about 50% of the Arab households.

Salman-Mousa referred to the rampant violence and incitement, noting that "in May, racist violence, as well as selective enforcement, peaked. In May, the Netanyahu government arrested some 2,600 Arab citizens, and some 360 ​​were indicted. However, only 350 Jews were arrested, mostly for several hours. Ultimately, only 35 were indicted. Racist violence continues in Jerusalem, the Negev, Tiberias and Binyamina."

In terms of social violence, she noted, "After years of cooperation between the security services and criminal organizations in Arab communities, organized crime has taken over many localities. 120 people have been killed since the beginning of the year. In our opinion, decreasing the rate of school dropouts, increasing drug sobriety and the rehabilitation of prisoners are possible solutions. "

She also noted the "selective enforcement of laws and the hostile attitude of police towards Arab citizens caused a severe lack of trust in law enforcement. In addition, police violence resulted in the arbitrary death of many Arab suspects not yet convicted of crimes.”

Regarding cultural rights, she said, "The violation of the status and culture of Arab society continues. Government services are not provided in Arabic, Arab culture receives less than 6% of the culture state budget, and there is political interference in content. There is no theater, museum, cinema or Arab arts school."

The Mossawa Center calls for a fundamental change in legislation, in the allocation of state resources to its Arab citizens and the end of the siege on Gaza. “We as Arab citizens see the discrimination against other minorities like the Ethiopian community, and the uprooting of entire villages. We as citizens have a responsibility to build solidarity and community and a better future for our children.”