Annexation: What does it really mean? A look through the eyes of the Palestinian minority in Israel 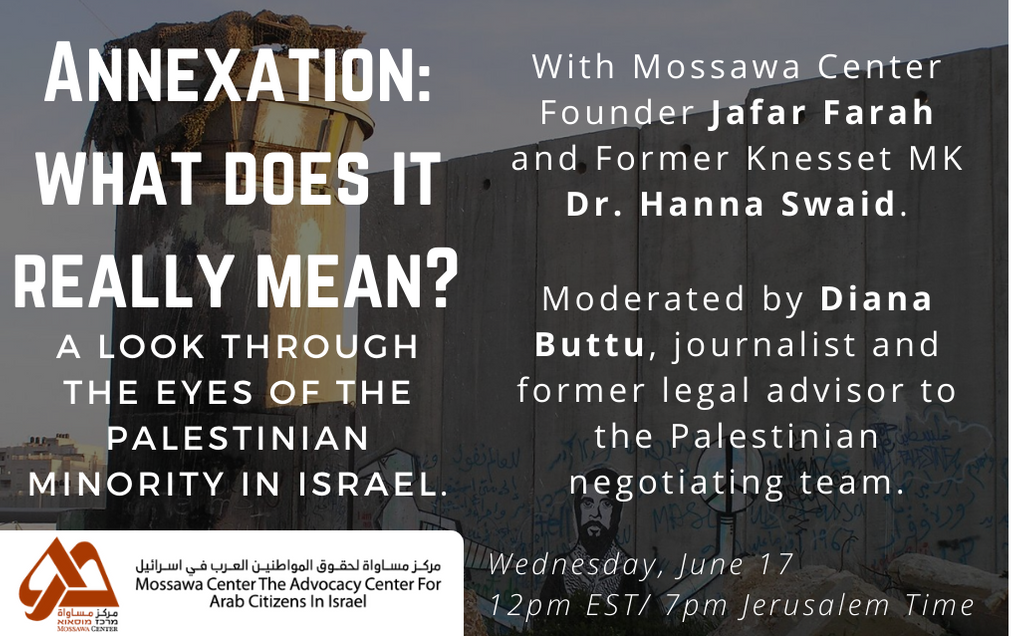 The discourse surrounding Netanyahu’s promise to annex parts of the West Bank has been binary - Israeli Jews vs. Palestinians in the West Bank - much in the same way as the discourse regarding the Palestinian struggle as a whole. However, governments, international organizations and bodies, and the public always forget the fact that 21% of citizens in Israel are in fact Palestinian Arabs. This part of the population is a key player in alleviating the suffering and oppression of Palestinians not just in Israel, but the Occupied Territories and Gaza.

‍
We, at the Mossawa Center and Friends of Mossawa, hosted a webinar moderated by Diana Buttu, a lawyer, journalist and former spokesperson for the Palestine Liberation Organization, with panelists Jafar Farah, Founder and Head of the Mossawa Center - The Advocacy Center for Arab Citizens in Israel, and Dr. Hanna Swaid, former Knesset Member of the Hadash party and Head of the Arab Center for Alternative Planning.

‍
This webinar, attended by nearly 200 people, shines the spotlight on Palestinian citizens of Israel, and explores the prospects of annexation from their perspective - what could Israeli rule over Palestinians look like? How will the demographics in Israel change and could such a change impact Israeli politics?

Throughout the webinar, Mr. Farah and Dr. Swaid make it clear that Netanyahu’s annexation plan has one purpose: to bring about the establishment of a One-State solution, with Dr. Swaid stating, "[t]his plan is aimed at killing any hope for a Two-State solution." In addition, Mr. Farah highlighted the crucial role of Palestinian citizens of Israel as Netanyahu and his government inch closer to annexation, “"There must be an alternative vision to counter the current mainstream vision of division in the region. We [Palestinian citizens of Israel], who comprise 21% of the Israeli population and represent a large bloc of 15 seats in the Knesset, need to lead this effort,” he stated.

Moreover, both panelists made it clear that the international community must work to oppose annexation in a meaningful way, with the purpose of preventing it – not just verbally condemn it as it has done regarding the occupation for decades. As Dr. Swaid explains, “[t]here could be international cooperation, in addition to pressure from the inside by Palestinian citizens of Israel and Palestinians in the West Bank, that could prevent annexation from occurring. In this case, Israel would probably just declare annexation verbally."

If you would like to find out more about what was discussed, you can find the full webinar with Diana Buttu, Jafar Farah, and Dr. Hanna Swaid here, as they explore the prospects of Israeli annexation and the implications behind it through the eyes of Palestinian citizens of Israel.

Jafar Farah is the Founder and Head of the Mossawa Center - the Advocacy Center for Arab Citizens in Israel. Farah is a long-time advocate and activist for civil rights for the Arab community in Israel. As a community organizer and activist, he was involved in establishing several organizations such as I'lam, ACAP (Arab Center for Alternative Planning) and the follow up committee for Arab education. He continues to write articles that are published regularly in the Hebrew and Arabic press. He is one of the founders of the first Arab-language television station in Israel, Hala TV.

Dr. Hanna Swaid is a previous Member of the Knesset between 2006-2015 who represented Hadash - a joint Arab-Jewish Alliance for peace and equality; a previous Mayor of the Arab town of Eilaboun between 1993-2003; and the founder in 2000 and currently the Chairperson of the Arab Center for Alternative Planning - an NGO concerned with land and planning rights of Palestinian Arab township and population within the green line. Dr. Swaid holds three degrees in Civil Engineering and Planning from Technion - Israel Institute of Technology.
‍

Our moderator Diana Buttu is a lawyer, writer and analyst based in Haifa. Her writings have appeared in the NYT, Washington Post, Boston Globe, Newsweek among others. She holds degrees from the University of Toronto, Queen’s University and Stanford Law School. She previously served as a legal advisor to the Palestinian negotiating team and President Abbas.