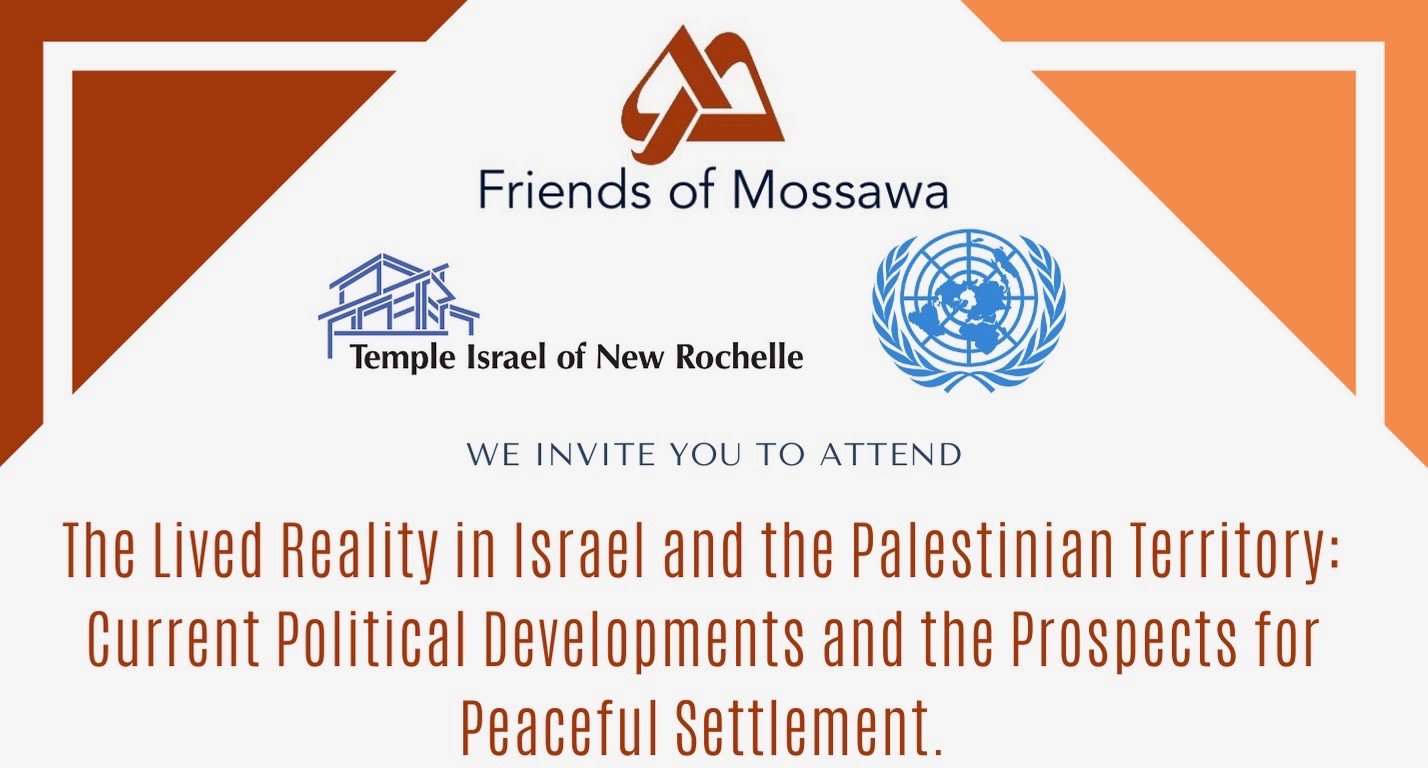 The Lived Reality in Israel and the Palestinian Territory

Israeli and Palestinian civil society representatives are bringing their perspectives on the prospects of peaceful settlement in light of the current political developments to the United Nations this month. Temple Israel of New Rochelle will host the event, which is open to the public, courtesy of Friends of Mossawa and the United Nations Committee for Palestinian Rights. Admission is FREE.

Hanan Al Sanah is the Director of Education and Community Development at Sidreh Association. She has been working in the Negev’s unrecognized Bedouin villages since 2003. Through her projects, over 3,000 Bedouin women have been engaged in literacy, leadership and rights education, and becoming active agents of change. She also led the establishment of the first women’s community center in an unrecognized village in the Negev, a tremendous success for women empowerment in the region. In 2005, Hanan became the first representative of Israel to become part of the UN’s CEDAW Committee.

Laura Wharton - a member of Jerusalem’s City Council as a representative of Meretz since 2008 and an adjunct professor in the Department of Political Science at the Hebrew University. She currently serves as Chairman of the board of the Cooperative Transportation Association, as well as a member of the board of the Center for Independent Living (for people with disabilities). Laura was a founder and board member of The Neighborhood Voice, which helped pass Israel’s Public Housing Bill and Uvaharta, an NGO that assists former members of the Ultra-Orthodox community.

Rana Abu Farha (al-Rishmawi) is an experienced Palestinian journalist and program presenter with over fifteen years of professional experience in national media. From a founding staff member of Ma’an News Agency, the largest independent Palestinian news organization, she has led teams of writers, reporters, editors, and producers to create quality daily programs of daily news and analysis. Currently a host of Ma’an 24, a live weekday program tracing the events of Palestine and the political world.

‍Ali Ghaith is a journalist, media specialist, and trainer. He worked with the French Television (TF1) for six years as Regional TV Producer. He was responsible for covering news stories from different parts of the Middle East during the Arab Spring. Currently, Ali is a regular contributor at OpenDemocracy, an independent global media platform. He is also the Director of Operations and Communications at a company contracted by the EU and other international organizations to implement media and communication projects in Palestine.

← Back to all events

Back to all events